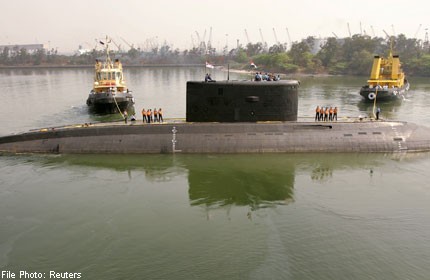 The Indian Navy's Sindhurakshak submarine is seen in Visakhapatnam in this February 13, 2006 file photo.

MUMBAI - A recently refurbished Indian submarine exploded early Wednesday in a dock in Mumbai, leaving rescuers scrambling to find 18 sailors who were on board.

The diesel-electric INS Sindhurakshak, which was recently refitted by Russia, has partially sunk with "only a portion visible from the surface", a statement from the nay said.

The NDTV channel showed grainy and shaky footage of the fierce explosion which lit up the sky at the naval dockyard shortly after midnight.

"The cause of the explosion is not known. We are searching for the 18 personnel," navy spokesman Narendra Kumar Vispute told AFP.

He said that divers had been deployed once the flames were extinguished and they were hunting for the men on board.

"There are no reports of casualties at the moment," he added.

The accident comes just days after New Delhi trumpeted the launch of its first domestically produced aircraft carrier and the start of sea trials for its first Indian-made nuclear submarine.

India has been expanding its armed forces rapidly to upgrade its mostly Soviet-era weaponry and react to perceived threats from regional rival China.

The Mumbai dockyard is a restricted area and was closed to media.