The firebombing of a Hong Kong restaurant has sparked a manhunt for two black-clad men wearing masks as police investigate whether the attack was linked to the protests.

Two petrol bombs were thrown into Spicegirl in Lai Chi Kok Road, Sham Shui Po, soon after 2am on Monday when the eatery was still open, before two assailants fled on foot, leaving staff to tackle the flames.

One of the firebombs exploded and was quickly extinguished by restaurant staff. The other did not go off and was later seized by police. No one was injured in the incident.

Police said the two male attackers were wearing black clothes, masks and hats at the time of the attack.

Officers scouted the area, but no arrests were made. Detectives have checked CCTV footage to gather evidence.

"The motive behind the attack is unknown," police said.

The business had been accused of offering shelter to men who had reportedly attacked anti-government protesters in Mong Kok last month.

After last month's attack, the person in charge of the restaurant issued a statement and posted it outside the entrance.

He said he had reported an incident last month to police when diners were involved in a dispute with others in the restaurant.

"I have never taken part in or planned any illegal and violent acts," the statement said.

Officers from the Sham Shui Po criminal investigation unit are handling the firebomb attack. It was not clear if any customers were in the restaurant at the time.

The ongoing protests were triggered by the now-withdrawn anti-extradition bill in early June, before morphing into a wider movement to fight for more democracy and the establishment of an independent inquiry into police's handling of the demonstrations. 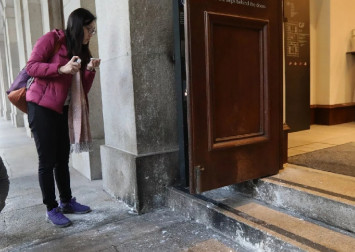 The firebombs exploded near a police van and were quickly put out although part of the vehicle's body was blackened in the incident. Police said no one was injured and no evacuation was needed.

On New Year's Eve, six plastic jerry cans of petrol were found along with 51 empty bottles hidden on a hillside near Lion Rock Country Park in Tsz Wan Shan.

Police said the amount seized was enough to produce more than 100 petrol bombs, adding that they were to be used to cause chaos at public events around new year.

Hours before the seizure of the haul, petrol bombs were hurled outside Lai Chi Kok government offices in a predawn attack. The shutters of the building and the floor were blackened. No one was injured.

Officers seized shards of glass and bottles suspected to contain petrol. Six people dressed in black and wearing hoods were believed to be involved. 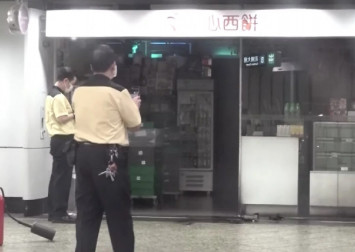 In November, police found more than 10,000 petrol bombs at several universities after protesters barricaded themselves on campuses and fought officers.

In Hong Kong, attempts to cause an explosion or making or keeping explosives with intent to endanger life or property carries a maximum penalty of 20 years in jail under the Crimes Ordinance.