The first person charged over the wave of protests that has gripped Hong Kong for months has denied attacking police.

Pun Ho-chiu, 31, known as "Occupy Mong Kok Painter" for his participation in the 2014 movement for greater democracy, pleaded not guilty on Wednesday to nine charges arising from a protest outside the city's police headquarters on June 21.

The charges included seven counts of assaulting police and one each of criminal damage and taking part in an unauthorised assembly.

Prosecutors said at Eastern Court that 15 police officers were prepared to testify against Pun, and that they would rely on video footage to prove their case.

But, with both sides yet to agree on the scope of their dispute, acting chief magistrate So Wai-tak adjourned the case to October 31 for a pretrial review.

At Kowloon City Court, another defendant faced two charges after he was arrested in Hung Hom on Sunday for allegedly disclosing personal details of police officers' friends and family.

Chan King-hei, a 32-year-old telecoms worker, was charged with one count of obtaining access to a computer with a view to dishonest gain, and a second count of conspiracy to disclose personal data obtained without consent. 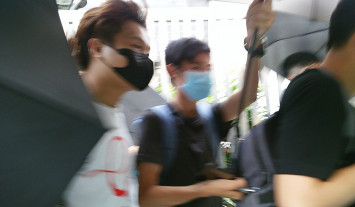 He was accused of using a company computer to gain access to and disclosing the personal data of Chan Cho-shing, a customer of his employer, including his landline phone number and Hong Kong identity card number.

The man was also accused of conspiring with a Telegram user, identified as @tanakayotsuba, to disclose Chan Cho-shing's personal data without the company's consent, on September 9.

But he was not required to enter a plea, as prosecutors needed more time for further investigation.

Acting principal magistrate Ada Yim Shun-yee released Chan King-hei on HK$5,000 (S$879) bail with the condition that he not recover other personal data, except when authorised by his employer, until his next hearing on November 20.

At West Kowloon Court, a judge lifted the curfews placed on 44 demonstrators previously charged with rioting, assaulting police and possessing offensive weapons during a protest on July 28.

Principal Magistrate Peter Law Tak-chuen overturned the restrictions he had placed on the defendants, who were charged over protests in Central and Western district on Hong Kong Island.

Law also quashed travel bans for all but three of the defendants, who had not applied to have them lifted.

As for the case of a 45th defendant, Yan Hoi-ying, a 22-year-old clerk who had jumped bail, senior public prosecutor Ivan Cheung Cheuk-kan said that airline records showed she had fled the city.

Separately, a man surnamed Lee has sued the commissioner of police on behalf of his underage son for injuries the boy allegedly sustained as a result of battery and negligence in Prince Edward MTR station on August 31.

The writ filed to the District Court on Tuesday did not provide details of the alleged treatment, nor did it specify the sum of damages demanded.