Five meals a day and counting 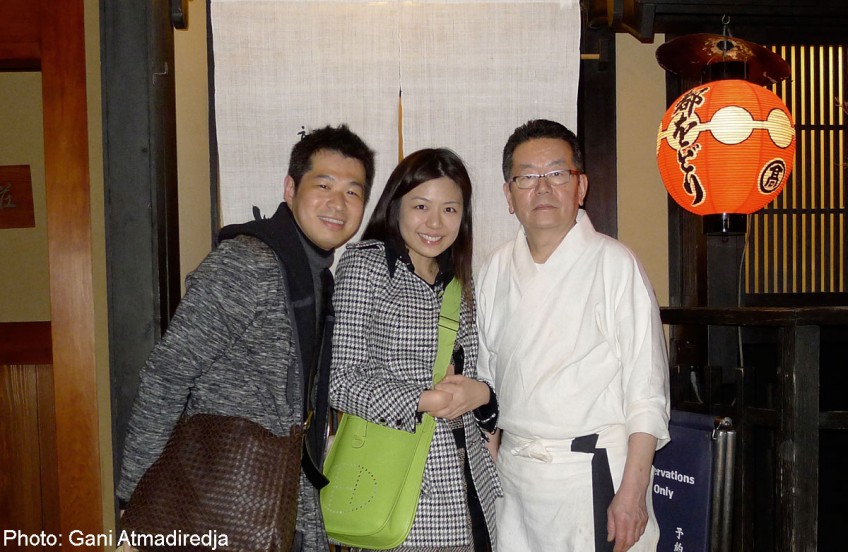 Mr Gani Atmadiredja and his wife Katherine with chef Shuici Katagiri of Isshin Kyoto, a speciality restaurant in Kyoto that serves an all-beef degustation menu.

JAPAN - On a trip to Japan last month, Mr Gani Atmadiredja had one aim: to eat as much as he was physically capable of.

The main goal of all four travelling companions – Mr Gani, his wife, Katherine, 27, who works in business development, and another couple – was to stuff themselves and sample as many varieties of food as possible during the three nights they had in each city.

The four of them ate five or six meals a day on average, says Mr Gani, 36, an Indonesian who has lived in Singapore for more than 20 years.

The itinerary of one of their days in Sapporo looked like this:

9am: Breakfast at Sapporo Central Wholesale Market where they ate sashimi and sushi.

11am: Early lunch of soup curry at Garaku, located between Susukino and Odori.

7pm: Set dinner at Le Musee, a fusion Italian and Japanese restaurant on the outskirts of Sapporo

11pm: Supper of kani shumai (crab dumpling) from a street stall in the Susukino area

Mr Gani chose Japan for his food holiday because he feels Japan is “the culinary Mecca of the world and has held that title for a while now”.

He adds: “The chef profession in Japan is highly regarded and the chefs are extremely committed to their craft. In Japan, not only can you find diverse styles of Japanese cooking but also high-quality Italian and French delicacies.”

Mr Gani, who made dinner reservations for the trip two months in advance and spent a month planning his meals, cautions that first-time travellers should be careful to proceed at a pace of eating they are comfortable with.

“This is, after all, a vacation first and foremost, so I wouldn’t recommend stuffing yourself at the expense of your trip.”

He suggests skipping breakfast and opting for an early lunch at 11am. “After that, you can take a sightseeing break before embarking on the next food adventure – a late lunch at around 3pm is recommended. This way, you will avoid the peak-hour crowd, especially at popular spots.”

Besides eating, they also went sightseeing and shopping for homeware.

“There were a few instances where we got into a food coma,” he admits. “But, normally, after a good night’s rest, we were always refreshed in the morning and hungry for more action.”