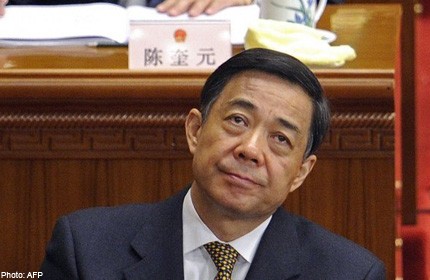 BEIJING - The writing was perhaps already on the wall for Bo Xilai, the controversial former top official of China's southwestern city of Chongqing, when he appeared at last year's parliamentary meeting, alternately chastened and combative.

In earlier annual sessions of parliament, Bo had swept in, all smiles and lanky grace, preceded by a wave of TV cameras and popping flashbulbs. This time he was uncharacteristically restrained.

Bo rolled his eyes at repeated questions from foreign reporters about a scandal involving then-vice mayor Wang Lijun, and the normally effusive state media and parliament delegates kept their distance.

Wang, who doubled as the city's police chief before his downfall, went to ground in the US Consulate in nearby Chengdu in February last year until he was coaxed out and placed under investigation.

"I certainly never expected this," Bo said of Wang's flight. "I felt that it happened extremely suddenly."

News of his own change of fortune came just as suddenly.

A few days after his news conference in March last year, a terse report from the official Xinhua news agency announced that Beijing had sacked Bo from his post, all but snuffing out his chances of rising to the top echelons of the Communist Party.

Now the end appears imminent for Bo, 64, whose long-awaited trial on charges of corruption, accepting bribes and abuse of power opens on Thursday, when he is certain to be found guilty by the Communist Party-controlled court.

Bo's wife, Gu Kailai, and Wang were jailed last year over China's biggest political scandal in years, which stems from the murder of British businessman Neil Heywood in November 2011, a crime for which Gu was convicted.

After first helping Gu evade suspicion of poisoning Heywood, Wang hushed up evidence of the murder, according to the official account of Wang's trial. In late January 2012, Wang confronted Bo with the allegation that Gu was suspected of killing Heywood. But Wang was "angrily rebuked and had his ears boxed".

After Bo was sacked, he disappeared from public view and has not had a chance to respond publicly to the accusations against him.

Sources told Reuters in February that Bo was refusing to cooperate with the government investigation, had staged hunger strikes and had refused to shave to protest against what he saw as his unfair treatment.

As the outspoken Chongqing party chief, Bo had mounted a daring bid for the nation's top political body, the party's Politburo Standing Committee.

He captured national attention with a crackdown on organised crime and corrupt police officers in Chongqing, China's teeming wartime capital, and brought about stronger economic growth. But he also alienated political peers.

The anti-mafia campaign netted thousands of people and tapped into popular anger over the corruption and collusion that has accompanied China's economic boom.

"Fighting organised crime is for the sake of letting the people enjoy peace and creating a clean social environment in Chongqing," Bo said at his parliamentary news briefing, defending his record.

"We are sure of ourselves and free of regrets."

Bo, a former China commerce minister and mayor of the northeastern port city of Dalian where he wooed foreign investors, once had a flair for the dramatic.

His directness and independent streak impressed foreigners but annoyed peers, who prefer to rule through backdoor consensus and often stilted slogans.

Analysts have noted that no one in the top leadership had publicly praised Bo or the crackdown on organised crime.

Bo is a son of late vice-premier Bo Yibo, making the younger Bo a "princeling" - a child of an incumbent, retired or late national leader.

His wife was a lawyer and their son, Bo Guagua, was educated at an expensive, elite British private school and then Oxford University. The younger Bo's Facebook photos from parties caused their own Internet stir.

He called his vision "Peaceful Chongqing." It included text messages with Maoist slogans, singing old-style revolutionary songs by civil servants, who also had to adopt poor families and staff petition offices where citizens can complain.

But Bo had difficulty shaking off the suspicion of some critics, both inside and outside the country, that he was more concerned with his own rise than that of China.