What's a flight attendant to do if she gets hungry, 35,000 feet in the air? Anything but eat passengers' leftovers, apparently.

An Urumqi Air flight attendant has been suspended after a video showing the stewardess chowing down on passengers' in-flight meals went viral.

According to reports, the airline confirmed that it had suspended the employee for not following standard procedures, stating that the boxes of food were leftovers.

However, netizens have jumped to the flight attendant's defence, expressing their support and sympathy. 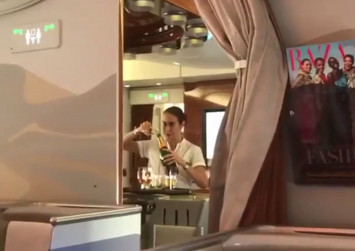 Wrote Facebook user Gabriel Seck: "When all she wanted to do was just to keep her stomach full and not waste any food..."

While on Weibo, netizens wondered why the issue was such a big deal, and that "the food was going into the bin anyway, what's wrong with taking a few bites?".

They instead attacked her colleague who shot and posted the incriminating footage online.