Former Jakarta governor Ahok believes his political career is over

JAKARTA - Former Jakarta governor Basuki "Ahok" Tjahaja Purnama may not make a comeback within the government's high ranks, saying he believes his political career is over.

President Joko Widodo is expected to soon unveil his Cabinet for his second term - which may comprise some new big names - but Ahok, who now prefers to be called "BTP", has dismissed the idea that he may be chosen as a minister, saying that it is impossible.

"(My image) is already impaired in this Republic," Ahok said on Monday (July 22). "I am not being pessimistic in this case, I am just spelling out the facts."

"The majority of religious people have branded me a blasphemer, while upper-middle class residents, especially women, are angry about my divorce and my (remarriage). So, in fact, (my political career) is already over," the 53-year-old was quoted by kompas.com as saying.

Ahok was convicted of blasphemy in 2017 following a series of sectarian rallies staged by Muslim conservatives in the capital who demanded the then governor to be prosecuted for a speech they believed to be blasphemous. 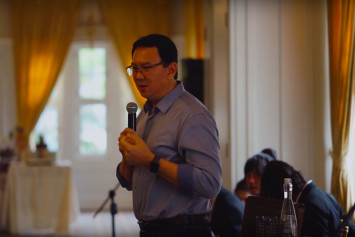 The case played a major role in Ahok's defeat in the 2017 Jakarta gubernatorial election, which observers said was marred by deep polarisation and religious tension.

He was released from prison earlier this year after serving nearly two years.

Ahok and his former wife, Ms Veronica Tan, finalised their divorce last year after he filed a divorce petition with the North Jakarta District Court on Jan 5 over allegations of infidelity on Ms Tan's part.

Some time after his release, he was rumoured to have held a wedding ceremony with policewoman Puput Nastiti Devi, who previously served as an aide to his ex-wife.

Ahok has said he is planning to host his own talk show instead.