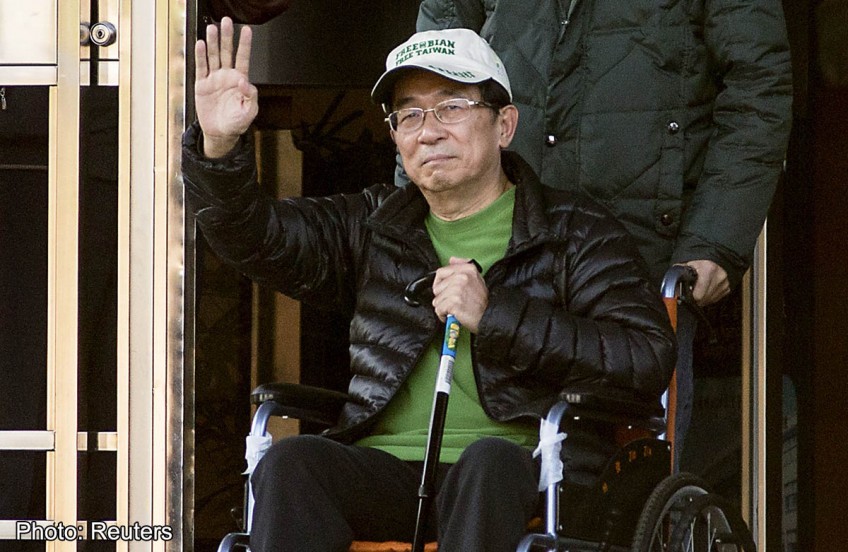 The 64-year-old, who led Taiwan from 2000 to 2008, will be released from a prison hospital Monday afternoon due to his "medical condition", said deputy justice minister Chen Ming-tang.

But he will initially only be given one month's parole, with his freedom depending on his state of health. He will then be subject to monthly medical check-ups.

The former Democratic Progressive Party (DPP) leader, who ended 50 years of Kuomintang party rule when he came to power, was sentenced to life in prison in 2009 for money-laundering and bribery during his term in office - reduced to 20 years after appeals.

Chen was transferred to a prison hospital in April last year after being diagnosed with severe depression, suspected Parkinson's disease and other conditions.

He attempted suicide in June, trying to hang himself with a towel in a bathroom of the prison hospital.

"The (independent) medical team think Chen needs to leave his present location where his medical treatment is not helpful to his condition," said deputy minister Chen after a parole board meeting Monday morning.

"So a decision has now been made to parole him for a month."

His freedom after that would depend on his medical condition, Chen added.

"He is expected to leave jail this afternoon," he said.

The move comes as political leaders from both the ruling Kuomintang and the main opposition DPP make moves towards reconciliation in the face of an increasingly frustrated electorate.

Taiwan has long been split between supporters of the China-friendly Kuomintang and the DPP, which is traditionally sceptical of closer ties with Beijing.

China claims sovereignty over Taiwan even though the island has ruled itself since their split in 1949 at the end of a civil war. Taiwan has never formally proclaimed independence.

The Kuomintang suffered a dramatic defeat at local polls in November as fears grow over warming ties with China under current president Ma Ying-jeou.

But there is widespread dissatisfaction across the political spectrum, with the rival camps seen as failing to unite to tackle major issues including a stuttering economy.

President Ma called for "cooperation" to deal with "domestic and external" challenges in his New Year address.

DPP leaders have also acknowledged the gulf between the camps is not beneficial for Taiwan in the long-term.

Chen's son Chen Chih-chung told AFP the former president would be taken straight to his home in the southern city of Kaohsiung after his release.

"I hope we can get my father home as soon as possible for further medical treatment," he said.

More than 200 supporters gathered outside the prison in the central city of Taichung where Chen was serving his sentence, waiting to greet him on his release later Monday.

The medical report on Chen was completed Friday but its delivery to the justice ministry was held up in traffic, leading some supporters to criticise the government for delaying his release.

But deputy minister Chen said: "No politics was involved in this matter," as he delivered the parole report Monday.

Chen Shui-bian insists that the charges against him are part of a politically motivated vendetta by the current Kuomintang government, in retaliation for his eight years in power when he promoted the idea of Taiwan declaring independence from China.