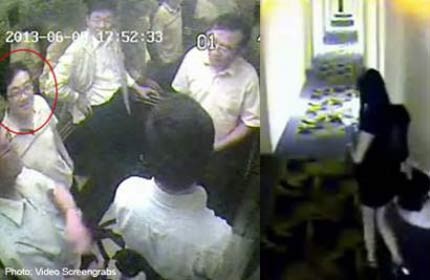 SHANGHAI, CHINA - Three judges and a State-owned company executive in Shanghai embroiled in a prostitution scandal have been expelled from the Party, with four also given 10 days' administrative detention by police.

The penalties imposed by the Commission for Discipline Inspection of the CPC Shanghai Committee and announced on Tuesday come five days after an anonymous blogger posted video clips of a group of officials from Shanghai High People's Court visiting karaoke clubs, alleging that they patronized prostitutes.

The commission said that Chen Xueming, chief judge of the No 1 Civil Tribunal at Shanghai High People's Court, and Zhao Minghua, deputy chief judge of the same tribunal, had been expelled from the Party. The high court will submit an appeal to the city's people's congress for them to be removed from their positions as judges and public servants.

Wang Guojun, deputy chief judge of the high court's No 5 Civil Tribunal, was placed on two years' Party probation and the high court will seek his removal as a judge.

Chen, Zhao, Ni and Guo, who, it was confirmed, had patronized prostitutes, were given 10 days' administrative detention by the city's Public Security Bureau, according to a statement posted by the Shanghai municipal unti-graft agency on its micro blog.

Hengshan Resort at 88 Chengnan Road in Shanghai's Pudong New Area, was ordered to suspend its business and start rectification.

The commission said the four judges dined with Guo, at his invitation, at a restaurant in Pudong's Nanhui area on June 9.

Afterwards, the five went to a private room at the Hengshan Resort with three private-sector employees for entertainment and to receive escort services from female karaoke workers.

On the same night, one of the private-sector employees sought prostitutes from a nearby health club, and Chen, Zhao, Ni and Guo patronized them.

The city's Party committee paid great attention to the tip-off from the blogger and decided to set up a joint investigation team at a special meeting, the Shanghai Disciplinary Commission said.

Shanghai Party leaders demanded a rapid and thorough investigation and severe punishment for corrupt individuals in the Party, the commission added.

The blogger, claiming that he suspected Zhao inappropriately intervened in a civil case in 2009 that led to an "unfair" court ruling that resulted in him losing millions of yuan, said he started collecting evidence that Zhao had breached Party and court rules a year ago.

He also said he has video clips showing Zhao's extravagant lifestyle, including spending on luxuries, ownership of several houses and impropriety with other women.