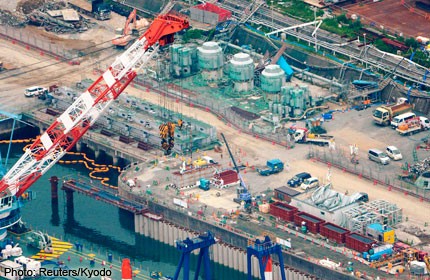 TOKYO - The operator of the crippled Japanese Fukushima Daiichi nuclear plant has started pumping out radioactive groundwater to reduce leakage into the Pacific ocean.

Tokyo Electric Power (TEPCO) began the work after it admitted last month that radioactive groundwater had been seeping out of the plant, confirming long-held suspicions that the sea was being contaminated.

By mid-August, TEPCO plans to complete a new system enabling it to pump out 100 tonnes of groundwater a day. The water will be filtered and recycled to cool the reactors.

But there are growing fears that existing facilities will soon be overwhelmed, as TEPCO scrambles to find ways to process and store waste water.

"It has been an urgent issue for us to suck out groundwater from this area as soon as possible," a TEPCO spokesman said on Friday. TEPCO officials could not be reached on Saturday.

The embattled utility - kept afloat by a government bailout - last month admitted for the first time that radioactive groundwater had been leaking outside the plant.

It has since said tainted water has been escaping into the Pacific for more than two years since the atomic crisis triggered by a huge quake and tsunami in March 2011.

An official at Japan's industry ministry said this week that Tokyo estimates 300 tonnes of contaminated groundwater may be seeping into the ocean every day.

"But we're not certain if the water is highly contaminated," he added.

A French expert said the environmental risk posed by the leaks was small compared to the overall radioactive contamination from the disaster.

While no one is officially recorded as having died as a direct result of the meltdowns at Fukushima, large areas around the plant had to be evacuated with tens of thousands of people still unable to return to their homes.