Full amenities but these cities are completely empty of residents 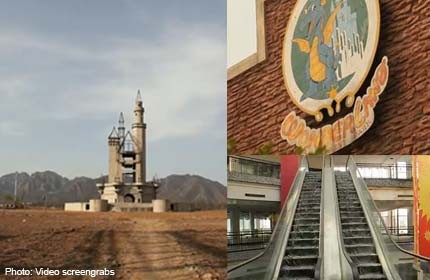 These eerie scenes are the result of plans for a sprawling city or shopping hub that are subsequently abandoned.

Developers erect towers of flats on farmlands but later leave their buildings in mid-construction.

No one wants to live in these cities, visit these malls or go to this themepark for various reasons.

The New South China Mall was touted as the largest mall in the world, but lack of demand led to almost no shops being opened for business.

Chenggong, with its supply of 100,000 new apartments, was built in 2003 as an overspill city for the nearby Kunming. However, little residents decided to move here.

A symptom of China's construction and property frenzy, these buildings are clearly investments that did not pay off.