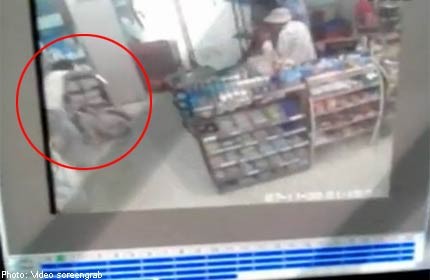 A 17-year-old female supermarket cashier was stabbed repeatedly by a man while two Chinese police officers looked on.

CCTV footage showed the girl was grabbed, choked and stabbed more than 10 times repeatedly while two police officers stood by and watched, seemingly not knowing what to do to stop the attack.

It was reported that it was only when the man stabbed himself and fell to ground did the policemen step forward to arrest him.

Online reactions to the video as well as the family members of the 17-year-old have been strong and angry, according to the ChinaSmack report.

According to the police report after the incident, the girl was identified as Xiao Hu and her attacker, Shen X, who was also her alleged boyfriend.

A witness named as Ms Hu said in reports that an employee of the supermarket had told her a man had been acting suspicous hanging around the supermarket for a long time.

He had purchased a kitchen knife and fruit knife from the supermarket.

Ms Hu said she though he may rob the store and alerted the police.

Police arrived but the suspicious man had left. He turned up at the supermarket an hour later and the police were called again.

This time, it was reported, that as soon as the policemen arrived, the man grabbed Xiao Hu by her neck and attacked her.

In the commotion, Ms Hu screamed at the policemen to save her but they only shouted at the killer, it was reported.

The director of the Bengbu City Public Security Bureau had said that the policemen were slow in their handling of the situation but there was no cowardly behaviour on their part.

The latest report on Aug 24 said that the policemen did no wrong in their failure to act and they will face no punishment.