Girls only have eyes for Trudeau, Nieto at APEC summit 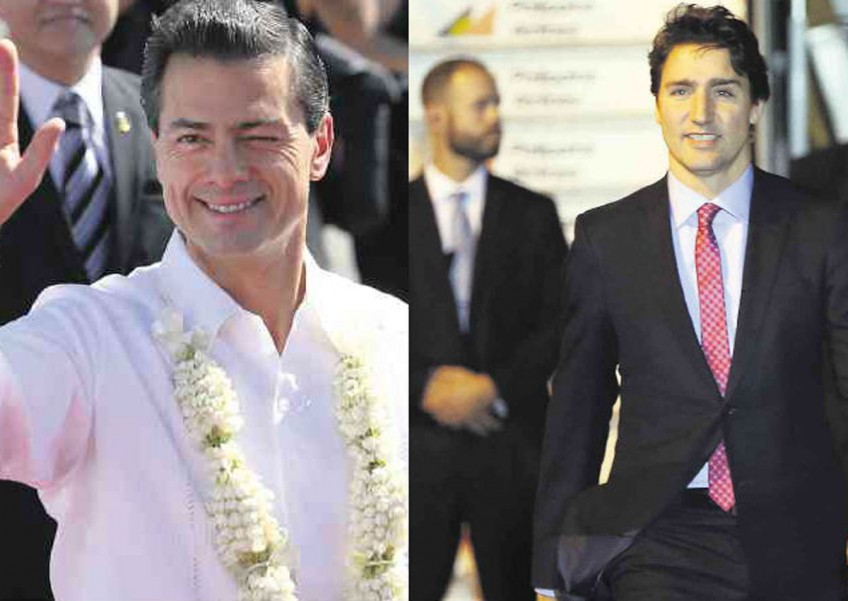 The man dubbed as the "sexiest leader" in the free world Canadian Prime Minister Justin Trudeau drew raves when he arrived Tuesday to attend the Asia-Pacific Economic Cooperation (Apec) summit.

In contrast, the acknowledged leader of that free world, US President Barack Obama, dispensed with any red carpet welcome when he arrived. After resting in his hotel, he immediately boarded a helicopter to fulfil his initial engagements.

Chinese President Xi Jinping briefly waved when he got off his plane and received a garland of flowers.

Obama, Xi and Trudeau were among the Apec leaders who came in Tuesday to attend the 21-nation, two-day Apec meeting that opens today.

A group of smartphone-toting airport employees and staff of the Bureau of Immigration took time off to get a glimpse of the 43-year-old Canadian prime minister when he landed.

Some members of the media tried to get a selfie from afar with Trudeau-dubbed "sexiest leader" for his boyish image and progressive and inclusive politics.

Aware of Trudeau's popularity, a member of the Malacañang media office earlier reminded journalists covering his arrival against shouting or making giddy shrieks.

Trudeau came in from Turkey to attend his first Apec summit two weeks after his election and the creation of a gender-equal Cabinet, which has caught the world's attention.

He is expected to focus his discussions with world leaders at the summit on his campaign promise to stimulate spending and growth to help middle-income Canadians.

While Filipinos have been captivated by his charm and looks, many have expressed more interest in how Trudeau will respond to calls for Canada to take back the 50 container vans of decaying waste that were illegally shipped to this country from the Vancouver area in July 2013.

Obama arrived at 11:20 a.m. after attending the G-20 meeting in Turkey, where the response to Islamic State's attacks in Paris topped the agenda.

It was Obama's second time to be in the Philippines after his state visit in April last year. He is the eighth US president to visit this country.

Noticeably there was neither a red carpet welcome nor a waiting car at Ninoy Aquino International Airport (Naia) for Obama.

"He (Obama) did not want a red carpet for his arrival," said an Apec official.

Obama had a few words with Gazmin and other officials before boarding Marine One, an airport call sign for one of two Nighthawk helicopters that traditionally fly with the US president's Air Force One.

The US president is only ferried by helicopter if land travel is assessed as a security risk by the US Secret Service.

Trailed by three Boeing V-22 Osprey helicopters, Marine One flew Obama to the Philippine Navy's flagship BRP Gregorio del Pilar, a US Coast Guard cutter when it was acquired in 2011 by the Philippines.

Xi was welcomed with a flower garland by Finance Secretary Cesar Purisima. Chinese Ambassador to the Philippines Zhao Jianhua and Philippine Ambassador to China Erlinda Basilio were also present.

A sudden decision to limit the coverage of the arrival of South Korea's first female president irked members of the media staked out at the Naia terminal.

According to Apec guides, they were told by the South Korean delegation that not all of the media members would be allowed to cover and take photos or videos of Park's arrival.

More than 30 foreign and local media members had been waiting for Park's arrival. The sudden change-announced while the media members were already positioned on a platform on the tarmac-irked the journalists, who trudged back to a holding area.

"This is not their airport, ours. If they want only four mediamen, then there should be no coverage for them to be fair to everyone," said a reporter for an online news website.

Mexican President Enrique Peña Nieto, his wife and their entourage arrived at Villamor Air Base at around 1 p.m.

Nieto was given full arrival honors by the Philippine Air Force. He was welcomed by Vice President Jejomar Binay and Tourism Secretary Ramon Jimenez.

"Gracias," Nieto said when a reporter told him, "Welcome to the Philippines, Mr. President!"

Vietnam President Truong Tan Sang arrived in the morning, accompanied by his wife Mai Thi Hanh. It was his second visit to the country, the first being in October 2011.

The sultan of Brunei, Haji Hassanal Bolkiah, flew in last night on a private plane. He was received by Transportation Secretary Joseph Emilio Abaya and Foreign Undersecretary Jesus Yabes.

This was Bolkiah's second visit to the Philippines under the Aquino administration.

The leaders of Thailand and Indonesia arrived almost minutes apart last night, the last ones to fly in for the day.

The airplanes of Thailand Prime Minister Prayuth Chan-o-cha and Indonesian Vice President Jusuf Kalla landed at past 7 p.m. at Naia.

Kalla was representing President Joko Widodo, who was unable to make it to the Apec summit.