Ayu Kurniawati, mother of a gymnast identified as SAS, shows off a number of medals won by her children at a number of regional and national championships at her home in Lirboyo village, Mojoroto district in Kediri, East Java on Nov. 29.

A female gymnast who was pulled from Indonesia's contingent to the 2019 Southeast Asia (SEA) Games in the Philippines is to compete in the upcoming 2020 National Games (PON).

The East Java Gymnastics coaching squad that accused the athlete, identified only as SAS, of losing her virginity, which led to her removal, has conveyed an apology and welcomed her back to strengthen the team.

Youth and Sports Ministry spokesman Gatot S. Dewa Broto said in an official statement that the athlete's parents and their lawyer, Imam Muklas, and the coach squad agreed to make peace.

"The ministry appreciates the agreement and hopes the conflict will soon pass. It is not only for the best interest of the athlete, to alleviate her psychological burden, but also for gymnastics coaching in general," Gatot said.

The apology letter, according to the statement, was signed by four coaches, namely Irma Febriyanti, Indra Sibarani, Rahayu Retno and Zahari, and had been accepted by SAS' parents and their lawyer.

"She is now an athlete of the regional training [session] who is being prepared to compete in the 2020 PON. The coaches are ready to continue the training and forget what had happened. We have high hopes for the athlete's achievements," Gatot said.

Gatot said the ministry had also contacted the Gymnastics Association of Indonesia (Persani), calling on the association to improve the relationships among the athletes and the coaches throughout the training programme.

"As the conflict has reached its end, Persani can continue training the athletes to prepare for the upcoming national and international competitions," he said.

Previously, Persani claimed that the actual reason behind the removal was the athlete's lack of self-discipline and serious lack of focus, which impacted her performance.

The association said that she was replaced by another athlete with a better performance record.

The last-minute dropping of the athlete surfaced in local media reports and centred on the athlete's mother, Ayu Kurniawati, who issued a press statement in late last month.

"There was no prior information regarding this matter," Ayu said. 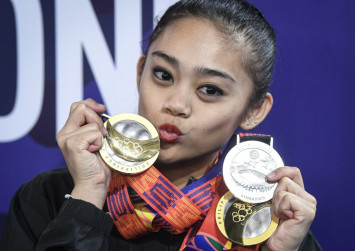 "We received no official statement or letter explaining why she failed. What we have heard is the coach labelled her a very undisciplined person who often went out at night during the training camp and that she had lost her virginity," she added.

Not only was the allegation untrue, Ayu said, but the accusation and publicity surrounding it had made her daughter feel ashamed to point of beating herself up.

The family reportedly had taken SAS to the Bhayangkara Hospital in Kediri, East Java, for a medical checkup.

SAS had been honoured by her local administration for her achievements in the sport. She secured two medals during this year's Asian School Games in Semarang, Central Java.