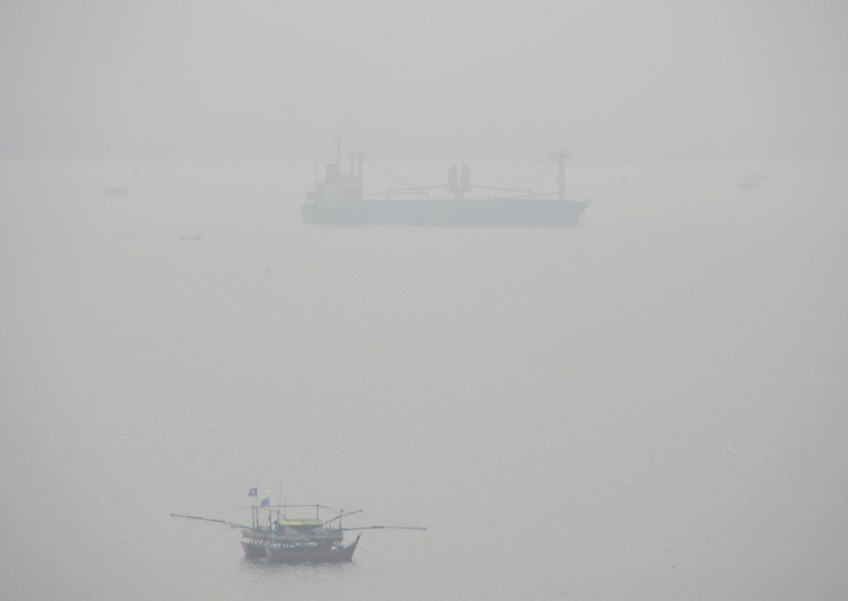 Thick haze shrouds a local port in Malahayati, in the city of Banda Aceh on Indonesia's Sumatra island.
AFP

The National Commission on Human Rights (Komnas HAM) has said that the uncontrollable spread of air pollution from forest fires in Sumatra could be categorized as a human rights violation by the state because the government allows it to happen every year.

"The government has committed fundamental human rights abuse because it does not stop [the forest fires] happening," Komnas HAM commissioner Roichatul said as quoted by kompas.com on Saturday. She said that preventing such annual disasters occurring was the responsiblity of the central government, provincial governments and regency and city governments.

Siti Nurlaila, another commissioner, said the spread of the choking haze had curtailed the fundamental rights of the people to live a healthy life. The people are forced to inhale polluted air in their own homes and workplaces. Therefore, she demanded the government temporarily relocate all people, particularly children, affected by the haze to more healthy areas.

Relocating the people to safe areas is no less important than the efforts to extinguish the fires, according to Siti. "The government has also to provide indoor education and indoor playgrounds for the children affected by the haze," Siti added.

On Friday, a group of people, who described themselves as Riau's Anti-Haze Movement visited the Komnas HAM office in Jakarta to complain about the worsening impact of the haze on people's health in the province over the past month.

Siti said that her institution would carry out an investigation. "We have to work immediately because the air pollution in the area has become intolerable," she said, adding that the investigation was important for her institution before submitting a recommendation to the government.

Meanwhile, Riau Provincial Health Agency recorded that the number of people suffering from upper respiratory tract infections (ISPA) as a result of this year's haze had reached 43,386 or about double the 27,200 recorded last year.