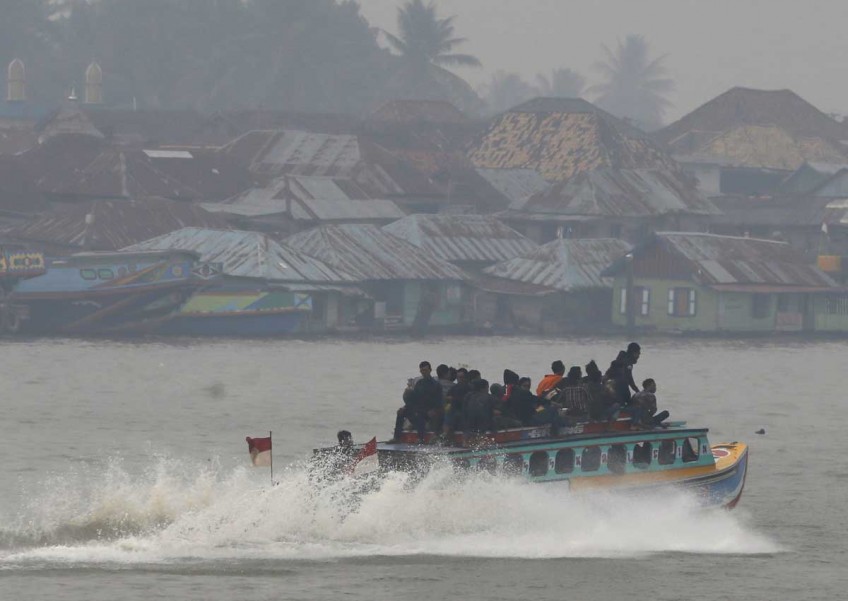 Passengers shrouded in haze as their boat traverses the Musi River in Palembang, Sumatra, yesterday. A surge in fires has been reported in plantation concessions in Indonesia.
Reuters

With a surge in fires reported in plantation concessions in Indonesia, there is a growing debate on whether fires were started inside or outside concession boundaries as pressure grows on the authorities to investigate those responsible.

According to Global Forest Watch, run by the Washington- based World Resources Institute and which provides detailed analysis of hot spots, 48 per cent of fire alerts in the Sept 13 to 20 period were outside concession lands, while 45 per cent were reported within pulpwood concessions, 3 per cent in oil palm concessions and 4 per cent inside logging concessions.

A coalition of Indonesian non-governmental organisations (NGOs) in Sumatra's Riau province has also found that 56 timber suppliers of the Singapore-based Asia Pulp and Paper (APP), Indonesia's largest pulp and paper firm, as well as its rival Asia Pacific Resources International Holdings (April), also based in Singapore, were detected having hot spots from January to August.

The coalition, Eyes on the Forest (EoF), said Riau NGOs would file police reports about the alleged involvement of several companies in setting fires. Hot spots were also recorded on 38 palm oil plantations.

APP, a unit of Indonesia's Sinar Mas group, is under the most pressure as it has dozens of supplier concessions in Sumatra and these concessions have recorded the highest hot spot total of any firm. APP has a zero-burning policy for all suppliers.

Ms Aida Greenbury, APP's managing director of sustainability, told The Straits Times last week that more than 90 per cent of fires were started outside APP supplier concessions. Those responsible included farmers and other companies.

EoF has challenged this claim, at least for some concessions. Using satellite imagery, it recorded fires in and around concessions of four APP suppliers in peat areas in Jambi and South Sumatra provinces. The four are PT Tri Pupajaya, PT Rimba Hutani Mas, PT Bumi Andalas Permai and PT Bumi Mekar Hijau.

PT Bumi Mekar Hijau in South Sumatra was among seven companies named as suspects by the police last week. The police are investigating 17 other Indonesian firms but have not fully identified them.

"Blaming outsiders for fires in their concessions simply reaffirms APP's failure on its zero-burning commitment and on legal compliance for fire prevention," EoF said in a statement last Thursday.

EoF analysed Landsat images and Nasa Fire Information for Resource Management System data for this year, to monitor the development of fires around PT Rimba Hutani Mas. Hot spots with high-confidence values started to show up in the concession in July.

"At least for this concession, the truth seems to be the other way around - fires spread from inside APP supplier's concession to the outside," said EoF.

EoF noted that some of the fires burned conservation areas in APP's concession, while Landsat imagery showed illegal logging occurring in the same area. Illegal logging remains a problem for many company concessions with intact forests.

Last Friday, in a separate statement, EoF released an animation using satellite imagery showing what it said was smoke coming out of the concession since Aug 17 this year.

"Twenty per cent of all high-confidence fire hot spots in South Sumatra this year... were detected inside this concession, or 432 out of 2,167 hot spots," EoF said.

The Straits Times asked APP for its response to EoF's findings and twice asked for its high-resolution maps to support the claim that more than 90 per cent of fires start outside their concessions. APP declined to provide maps.

Still, Ms Greenbury said no other company "has been as transparent as APP on the issue of mapping" and supplying data. APP's maps are available online and it provides data to Global Forest Watch.

"Hot spot maps can only show the location of hot spots," she told The Straits Times.

"On-the-ground verification and thorough investigation is needed to identify where, how and why fires start," she said. "Field verification has been ongoing and reported to the government."

In a reply to queries, an April spokesman told The Straits Times: "Our verified data says we currently have no fires in our concessions.

April's fire suppression teams have been active and successful in containing fires near our concessions in Riau, where previous fires have been reported to the local police."