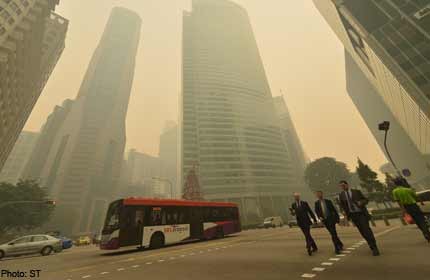 KUALA LUMPUR - Officials from five Southeast Asian nations met Monday to discuss the hazardous smog that blights the region every year, but the worst-hit countries have held out little hope of an early solution.

The officials from the ASEAN countries that form the bloc's "haze committee" began two-day talks on Indonesian forest fires, before their environment ministers meet Wednesday.

Forest fires on the Indonesian island of Sumatra in June left neighbouring Singapore and Malaysia choking on the worst haze in more than a decade.

The air pollution deterred tourists, forced schools to close and caused a spike in respiratory illnesses.

But the two worst-hit nations and green activists hold out little hope of a significant outcome from this week's meeting.

Singapore Prime Minister Lee Hsien Loong admitted in early July the forest fires in Indonesia would take "a very long time" to eradicate because of the country's sheer size.

"I know that there will be a spirit of cooperation but I think solving the haze issue will take a very long time, with the best will in the world," he said.

Malaysia's environment minister Palanivel Govindasamy refused to be drawn on immediate solutions to the haze which sent pollution levels to a 16-year high, forcing a state of emergency in two southern districts.

"Our job is to work closely with Indonesia and our ASEAN partners on the haze meeting. Once an agreement is reached we can go forward," he told AFP, after stressing "long-term solutions" would be the focus of the meeting.

The three nations along with Brunei and Thailand have met on 14 previous occasions since 2006, but have little to show for it.

Willem Rampangilei, Indonesia's deputy coordinating minister of people's welfare, said fighting haze was a "national priority" for his country and it would take legal action against slash and burn offenders.

"Of course this is our wish ... there will be no more haze," he told AFP on the sidelines of the meeting.

Asked if those causing the smog would be prosecuted, he said: "Sure, sure, sure."

Yeah Kim Leng, group chief economist of RAM Holdings, said the haze crisis would have a "serious knock" on regional economies if not resolved.

"We need to find a permanent solution. If not, it will have a serious impact on tourism which is a key foreign exchange earner for Malaysia and Singapore," he said.

The main obstacle appears to be internal Indonesian politics, because slash-and-burn remains the cheapest - albeit illegal - way to clear land for agriculture.

Jakarta has sought parliament's approval to ratify a 2002 pact on haze pollution which has been signed by all its partners in the Association of Southeast Asian Nations. But the proposal was rejected in 2008.

The treaty has been resubmitted to the current legislature, although no timeline for ratification has been given.

Singapore and Malaysia have demanded Indonesia punish those behind the blazes.

But Jakarta says some fires have been set in plantations owned by its neighbours, especially Malaysian palm oil firms.

An analysis by the World Resources Institute of the mid-June haze revealed that half of the fire alerts in Sumatra were in oil palm and pulpwood plantations.

"It is highly likely that severe burning seasons like the one we have seen over the past several weeks will be repeated," it warned.

The haze has been a bone of contention in ASEAN for nearly two decades, with the worst haze crisis in 1997-1998 estimated to have cost the region US$9 billion.