The smog crisis has taken its toll on the North's tourism, with a significant drop seen in hotel-room bookings even in Chiang Mai, which is otherwise hugely popular as a destination for Songkran celebrations.

"Thai tourists are worried that the haze will harm their health," La-iad Boonsrithong, the president of the Upper North Hotels Association, said yesterday. The amount of PM2.5 in the air - particles not more than 2.5 micrometres in diameter - has exceeded the safe limits in Chiang Mai for a few months already.

HIGHLIGHT OF THE YEAR

Songkran is one of Thailand's most colourful events, with millions of people - including foreigners - celebrating the festival across the country from April 13 to 15 every year. 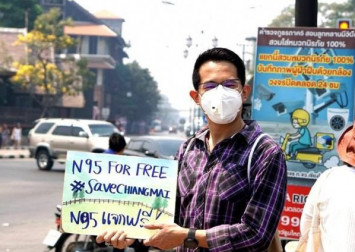 "Normally, bookings for Songkran would be more than 85 per cent of total occupancy in Chiang Mai by now. But because of the smog problem this year, the bookings are only 60 per cent," La-iad said.

Pakanan Vinijchai, who heads the Tourism Authority of Thailand (TAT)'s Chiang Mai Office, said 5 per cent of Thai tourists had either cancelled their advance bookings or postponed their trip to Chiang Mai.

"We believe they are closely monitoring the situation," she said, adding that no foreigners have cancelled their advance bookings over the smog to date.

La-iad said hotels in the haze-affected northern provinces were now trying to ease the smog by sprinkling water from high-rise buildings.

TAT Governor Yuthasak Supasorn, meanwhile, admitted that the smog problem would likely dent the tourism income of Chiang Mai, Chiang Rai and other nearby provinces by Bt 2 billion (S$85 million).

"But I trust that tourists are just switching to lesser-known destinations," he said.

Chiang Rai Industrial Council's acting president Kitti Tissakul said the number of tourists in the province had dropped by between 10 and 20 per cent because of smog.