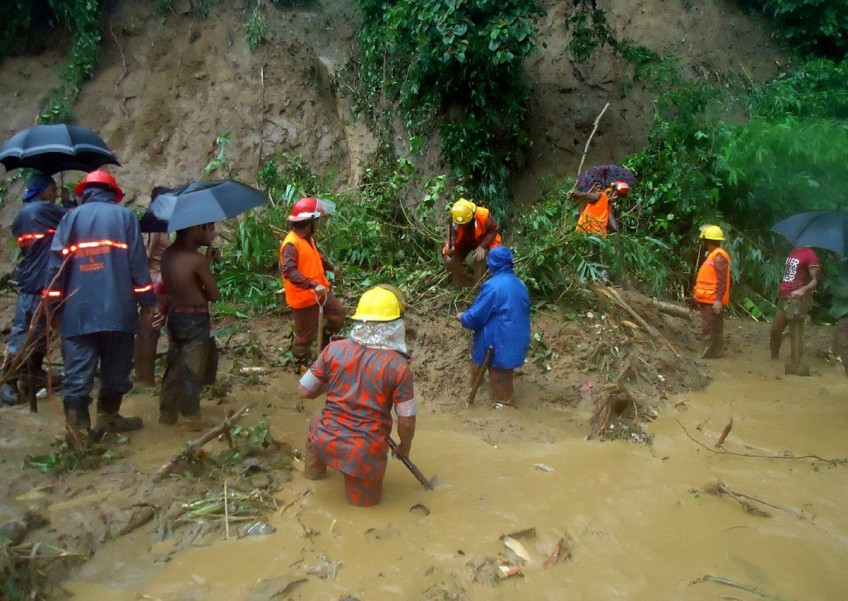 CHITTAGONG - Heavy monsoon rains and landslides have killed at least 134 people in southeast Bangladesh, burying many in their homes as they slept, authorities said on Tuesday.

Three young children from the same family were among those killed in the disaster, which comes just weeks after a cyclone battered the region and destroyed camps housing thousands of Rohingya refugees.

Police warned that the death toll would likely rise as emergency workers reached remote parts of the Chittagong Hills, where telephone and transport links had been cut.

Many of the victims were from poor tribal communities in the remote hill district of Rangamati, close to the Indian border, where 60 people were killed when mudslides buried their homes.

One woman described the ground sliding from beneath their family home in the dead of night, sending them fleeing to a house next door.

"A few other families also took shelter there, but just after dawn a section of hill fell on the house. Six people are still missing," Khatiza Begum told local news website Bangla Tribune at Rangamati hospital.

District police chief Sayed Tariqul Hasan said most of the landslides happened before dawn on Tuesday.

"Some of them were sleeping in their houses on hillsides when the landslides occurred," he said.

Police and local authorities ordered the evacuation of thousands of people living in slums at the base of hills in the neighbouring district of Chittagong, where 26 people have been confirmed dead.

At least 126 people were killed in that district when a massive landslide buried a village a decade ago.

In the latest incident six people were killed in the nearby district of Bandarban, among them three children buried by a landslide as they slept in their home.

Reaz Ahmed, head of the Department of Disaster Mana­gement, said disaster response teams had been deployed but had not yet been able to reach all the affected areas.

"Once the rains are over, we'll get a full picture of the damage and get the recovery work in full swing," he added.