Heroic ethnic-Pakistani policeman in HK amazes with his Cantonese ability 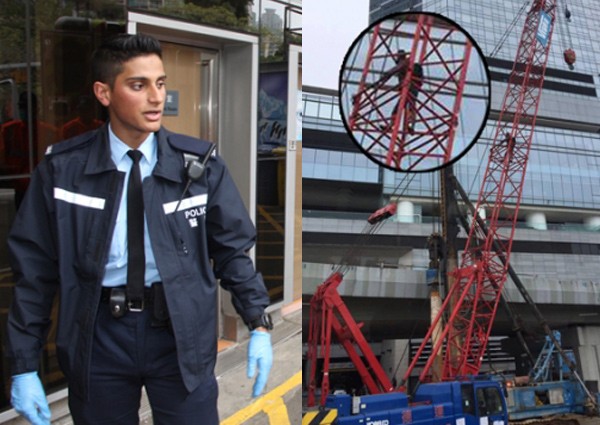 A Hong Kong policeman of Pakistani descent left netizens awed by his heroism and Cantonese prowess, not to mention dashing good looks, after the 20-year-old helped talk a man out of committing suicide.

Law enforcer Ifzal Zaffar was called to the scene at the Western Harbour Tunnel construction site on Sunday morning where a suicidal Pakistani man had climbed up a crane, Coconuts Hong Kong reported.

Using their common language of Urdu, Ifzal managed to convince the man, named Anan, to retreat from his position. Anan was eventually taken to hospital.

According to Apple Daily Hong Kong, Ifzal is an ethnic Pakistani who was born and bred in Hong Kong, which explains his fluent and effortless Cantonese.

Not convinced? Just take a listen to this interview posted by the Hong Kong police force:

Said Ifzal: "I used the techniques we learned at the academy... I think he felt safer knowing that I could talk to him in his own language."

Ifzal, whose father is a traditional dressmaker, said his childhood ambition was to be a policeman. He's a graduate of the Hong Kong police academy's Project Gemstone programme, which provides language classes to non-Chinese members of the force.

Ifzal pointed out that their native language skills can help many Pakistanis and other Asian minorities living in Hong Kong, who might otherwise shun the police due to the language barrier.

Besides commending him on a job well done, netizens have expressed amazement at his Cantonese language ability.

And as expected, a great deal of online attention has also been focused on his good looks.

When asked by Apple Daily if he was on the look out for a potential girlfriend, the shy police officer demurred: "I think work is more important at the moment."

So the next time you're around Hong Kong's Yau Tsim Disctrict (comprising the Yau Ma Tei and Tsim Sha Tsui area) where Ifzal is based, you'll know to keep a lookout for this young and single law enforcer and give him - no, not your number, but a well-deserved pat on the back.