Hiking with children is good for the whole family 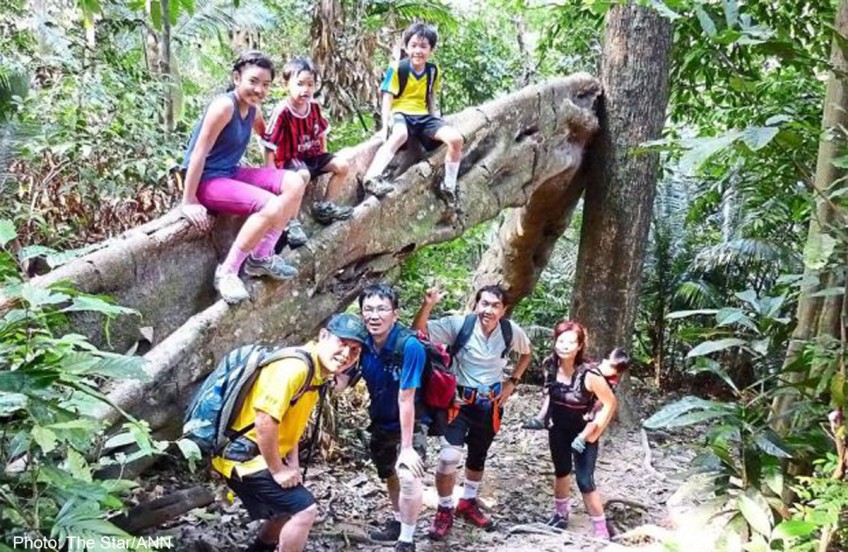 Jungle jaunt: A group photo of the writer (with Lil Joseph in a backpack), her husband beside her, and their kids (from left) Audrey, Dylan and Joshua perched on a tree trunk.

The day I traded my high heels for hiking shoes, the malls for hills and the stale city air for fresh jungle air, my life was never the same again.

It all began when my dear hubby Adrian Yeong took up hiking. He had been hiking close to six months to improve his health and fitness when I saw the changes in him: he had shed 13 kilos and was much fitter and healthier than before. Finally one day, I agreed to join him.

Wasting no time, he got me my first pair of hiking shoes. I had my first taste of hiking at the Challenger trail in Gasing Hill, Petaling Jaya, on August 1, 2010. Since then, Gasing Hill has become our regular training ground.

Friends who heard of our hiking activities thought we were crazy to hike three times a week and when they learnt that we also brought our younger four children along with us, in their dictionary, we were well...insane. Why bother doing such tiring activities?

Our children being city kids were no angels either. They were always trying to find excuses to escape from hiking so that they could spend time at home instead, watching television and playing computer games. But as parents, we had the last say and so our hiking journey began...

By training our children, who were then one-plus, three, seven and ten years old to hike, all of us eventually got fitter and stronger. Our speed and endurance improved. In a short span of five months, Adrian and I did 50 hikes while our kids went on 30 hikes with us.

We had explored almost all the hills and a few waterfalls in the Klang Valley. After a while, it felt a bit boring hiking the same hills. I dreamt of exploring further but often doubted if we were up to the challenge of hiking more than an hour plus with our young kids.

Little did I know that one day I would get to know a Facebook friend, Michael Mui, and that our feet would soon hit real mountains. Mui got to know of our family hiking activities and invited us to join him to hike Gunung Angsi and Gunung Datuk (both in Negri Sembilan).

In his own words, he described these mountains as "a stroll in the park!" That was our first event with the Freewill Hikers Club, a dynamic hiking group based in Johor led by Captain Richard Yeoh. My husband, being an adventurous guy, took up the idea immediately and the rest is history.

On August 11, 2012, Adrian and I, together with our young hikers, hiked our first two mountains Gunung Angsi and Gunung Datuk, on consecutive days. My two kids Audrey (then aged 12) and Dylan (nine) hiked on their own accompanied by our new friends while I carried Joshua (five) on and off as he happened to be a bit moody in the beginning.

My capable hubby backpacked Lil Joseph (three years old and 12kg in weight) up to the peak of Gunung Angsi and back. Hiking more than an hour with heavier loads than other hikers made it tough.

To make matters worse, wearing the new hiking boots I got him as a surprise, he twisted his ankle during the hike. Despite having applied some ointment over the night, he still had not recovered from the injury and so I volunteered to backpack Lil Joseph up Gunung Datuk the next day.

I remembered assuring my dear hubby that I would hand the little boy over to him should the going get too tough. My hubby agreed to my suggestion. That was my first hike carrying my son up a mountain.

It was my first experience and I found Gunung Datuk to be a steep mountain, with endless roots along the way. Carrying my little boy up weighed me down though I found it quite easy to go on all fours, pulling myself up by tree roots.

Our new friends from Freewill Hikers were very helpful and took care of our two older kids, Audrey and Dylan. While Audrey was slow and steady, Dylan flew up with them and managed to reach the peak in 1 hour 40 minutes; whereas, with my load, we took about 30 minutes more.

It was tiring and our friends kept bluffing us - "You are almost there", "15 minutes more to the peak", "Just another 15 minutes more" - in the name of encouragement.