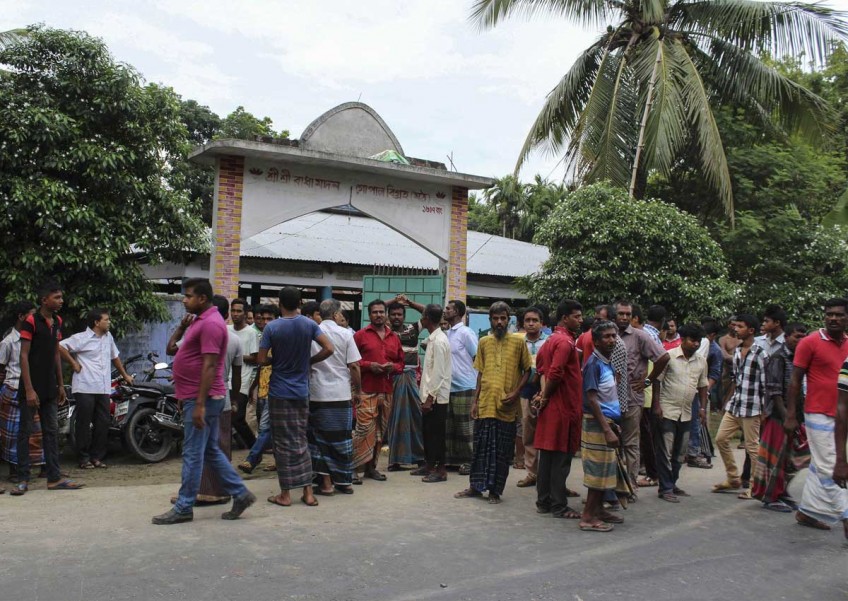 Bystanders gather after Hindu priest Shyamananda Das was hacked to death in Jhenaidah some 211kms north-west of Dhaka on July 1, 2016.
AFP

DHAKA - Unidentified attackers stabbed and critically wounded a Hindu priest in southwest Bangladesh Saturday, just a day after a Hindu temple worker was hacked to death in an attack by suspected Islamist militants.

Police said 48-year-old priest Bhabasindhu Roy of the Sri Sri Radha Gobinda Temple in Satkhira district was attacked inside the temple compound as he slept.

"They stabbed him in his chest and back. His condition is critical and we're trying to send him to a hospital in Dhaka," deputy chief of Satkhira police Atqul Haq told AFP.

He said it bore the hallmarks of recent attacks on minorities by suspected Islamist militants.

The attack came just hours after gunmen stormed a restaurant in the Bangladeshi capital and took dozens of people hostage including several foreigners.

The Islamic State group claimed responsibility for the attack Friday night on the Holey Artisan Bakery restaurant in Dhaka's upmarket Gulshan diplomatic quarter in which two police officers were killed.

On Friday a Hindu temple worker was hacked to death in the western Bangladesh district of Jhenaidah.

Three men on a motorcycle attacked Shyamananda Das as he walked along a road near the temple early in the morning, police said.

Bangladesh is reeling from a wave of murders of secular and liberal activists and religious minorities that have left some 50 people dead in the last three years.

Victims of the attacks by suspected Islamists have included secular bloggers, gay rights activists and followers of minority religions including Hindus, Christians and Muslim Sufis and Shiites.

Since April, more than a dozen people have been hacked to death amid a sharp spike in the targeted killings.

Most of the recent attacks have been claimed by the Islamic State organisation or the South Asian branch of Al-Qaeda.

Prime Minister Sheikh Hasina's government, however, has blamed homegrown Islamists for the attacks.

Experts say a government crackdown on opponents, including a ban on the largest Islamist party Jamaat-e-Islami following a protracted political crisis, has pushed many towards extremism.

Last month police arrested more than 11,000 people, including nearly 200 suspected militants, in an anti-Islamist drive criticised by the opposition and some rights groups, which said it was used as an excuse to clamp down on dissent.

At least nine suspected Islamists were shot dead in what police said were gunfights. Some rights activists contradict that account and say they were extrajudicial killings.