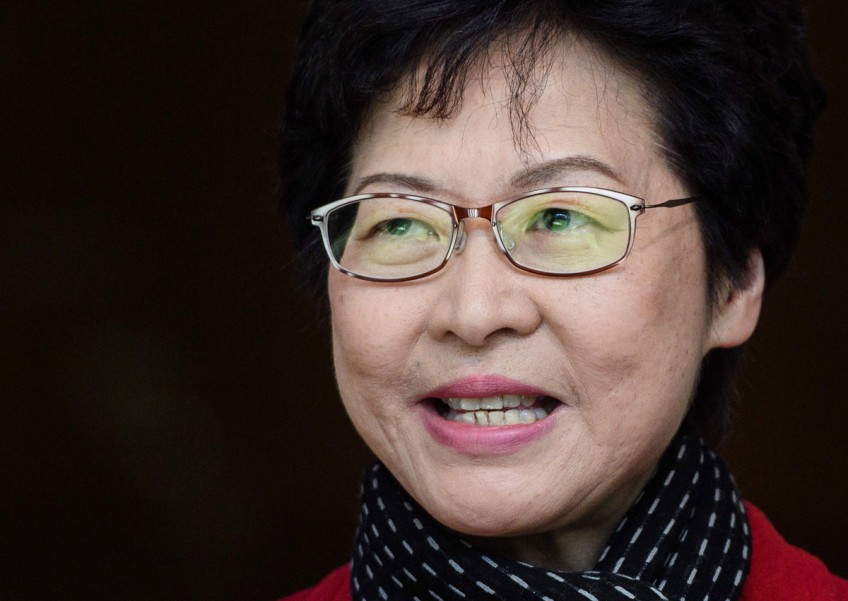 Noting that land supply is one of Hong Kong's "major constraints", Mrs Lam said that she is "very determined to tackle that in the next term of government in a big way".
AFP

In her first public address as Hong Kong's new chief executive-elect, Carrie Lam on Tuesday emphasised that her administration would focus on boosting economic development and investing in talent.

Both are among her top priorities, which also include addressing housing problems and sociopolitical divisiveness.

Speaking on Tuesday at the 20th Credit Suisse Asian Investment Conference held in Hong Kong, Mrs Lam told a packed ballroom of mostly foreign investors that she would usher in a "new era" of governance come July 1, when she is to take office as the city's new leader.

She said that her government would have new roles in facilitating and promoting bilateral and multilateral economic ties, and that she would introduce a "new fiscal philosophy" focused on tax incentives to better attract foreign investors and long-term investment in talent.

"Hong Kong is facing lots of tough competition both from economies in the region and in the mainland," said the 59-year-old, who previously chaired the International Business Committee under her role as city chief secretary.

Hong Kong has "a lot of catching up to do" with rivals such as Singapore and London in government-to-government functions, such as in avoidance of double taxation agreements, she said.

More also has to be done to help Hong Kong businesses expand overseas, such as better leveraging trade offices abroad.

"We are no longer just a connector between mainlander businesses and overseas businesses . . . Some of our corporations are big enough to invest overseas and operate overseas," said Mrs Lam.

On taxes, she elaborated on her original campaign promises to introduce a "two-tier profits tax system" - which she has said would translate into a tax reduction of 40 per cent for "tens of thousands of enterprises" - and "super-deduction" tax incentives.

Her proposed two-tier profits tax system would allow the first HK$2 million (S$359,000) of profits to be taxed at 10 per cent, instead of the current 16.5 per cent, "so there would be a bit of savings by SMEs which they could, in turn, invest in their business and also to provide better welfare for employees".

The super-deduction tax measure would allow the government to steer corporations in the direction of specific areas Hong Kong would like companies to invest in, said Mrs Lam.

These could include providing a "200 per cent tax deduction for corporate spending on research and development" to boost Hong Kong's innovation and technology sector, and similar deductions to stimulate growth in environmental facilities and the creative industry.

Mrs Lam said that her government would soon be hosting a summit to gather suggestions on how to craft "new directions" for Hong Kong's tax, but assured investors that she would not be changing the simple tax regime or low tax rates of Hong Kong.

Another aspect of her administration's fiscal philosophy would be to focus on long-term investments in talent with the over HK$900 billion in accumulated reserves.

Mrs Lam said that she would fulfil her campaign promise to increase the recurrent expenditure for education by HK$5 billion once she takes office.

"We need to continue to invest in our infrastructure, but more importantly to invest in education. In fact, invest in the nurturing of talents so that we have the needed skills and expertise to drive our Hong Kong economy," she said.

Noting that land supply is one of Hong Kong's "major constraints", Mrs Lam said that she is "very determined to tackle that in the next term of government in a big way".

"Not just looking at an annual land sale programme, but really the long-term supply of land, or better still, a land bank for Hong Kong," she said.

The long-time civil servant had struck similar notes in her victory speech on Sunday, after winning the election with more than twice the number of votes from a 1,194-strong Election Committee than closest rival and popular former city finance chief, John Tsang.

She pledged to "heal the divide" in Hong Kong, which has grown increasingly polarised and hungry for political reform since the 2014 pro-democracy Occupy Central mass protests, but said that she would start first with other "easier subjects" on the top of her agenda such as housing, education and tax measures to boost the economy.

"It is very difficult for her to put forward political reform at the moment, so she will choose an easier way to govern first, and try to improve Hong Kong people's lives through investments in housing and education," said political analyst Ng Hoi Yu.

"She will try to please Hongkongers first."

Housing, education and economic development are also sources of frustration in Hong Kong, said professor Linda Li from the City University of Hong Kong's department of public policy, and could be avenues for Mrs Lam to obtain early success in her term and win back trust from a population critical of her ties with Beijing.

Said Prof Li: "Compared with political reform, we don't have to work with the (Chinese) central government on these."

This article was first published on March 29, 2017.
Get The Business Times for more stories.