HK woman tells boyfriend to kneel, then slaps him 14 times in public 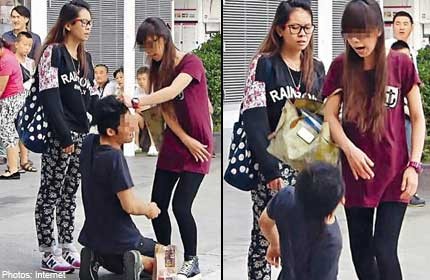 A video recording of a Hong Kong man being repeatedly slapped by his girlfriend in public has gone viral over the Internet.

In the video, the young man can be seen kneeling down in front of two women. One of the women is heard yelling at him in the Cantonese dialect, accusing him of inviting another woman home with him.

For most of the argument, she can be seen grabbing his hair and slapping him. The video shows her slapping him at least 14 times in just 5 minutes.

According to Hong Kong media reports, the 23-year-old man had been told to kneel by his girlfriend, a 20-year-old woman who is seen yelling at him. The other woman in the video is believed to be the woman's cousin, and is also the girl he was accused of inviting home.

The man, who remains on his knees throughout the argument, maintains his innocence and accuses his girlfriend's cousin of maligning him.

More than once, he can be seen turning to the cousin pleading for her to say something. At one point, he shouted: "Why don't you say something? I didn't do anything, why are you maligning me?"

Even though he can be heard wailing and sobbing, his girlfriend seems bent on getting him to confess. She ignores his pleas, grabbing him by the hair and slapping him instead.

A large crowd had gathered to watch the commotion by now. Many of the bystanders can be heard expressing disbelief that a grown man would allow his girlfriend to treat him that way.

Many passers-by try to speak up for the man. One woman tells him: "You're a human being. Why can't you choose to bring someone home? Even your mom would not force you to get on your knees. Think about this carefully".

Many others also urge him to get on his feet. Another man says: "Why do you have to kneel?"

Angered, the girl tells the passers-by to mind their own business. "You are all just bystanders. You don't know how he treats me," she said

Since the video was uploaded online, many netizens tracked the man and his girlfriend down on social media sites like Facebook.

From his Facebook updates, it appears that this was not the first time he was slapped. He had expressed his frustration with being hit and mistreated in several of his status updates.

His girlfriend is believed to be working in a branch of a large pharmacy chain in Hong Kong.

According to Apple Daily, she was arrested and has since been released on bail.