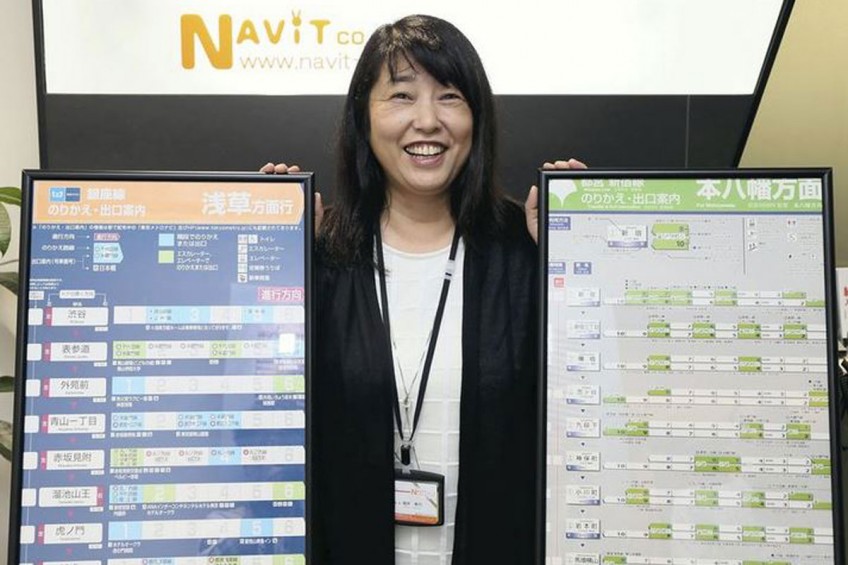 Yasuyo Fukui, president of Navit Co. and inventor of the Norikae Benri Map.
The Yomiuri Shimbun

Which train car should I ride in to be close to the stairs and elevator when I get off? Where is the closest toilet? Norikae Benri Maps, or easy transfer maps, have the answers. They can be seen on almost every platform in subway stations throughout the Tokyo metropolitan area and have become vital for a smooth commute. Their developer, Navit Co. President Yasuyo Fukui, 49, transformed herself from a homemaker into an inventor and then a business leader all thanks to one everyday occurrence.

The following are excerpts from Fukui's interview, which was conducted by Yomiuri Shimbun Staff Writer Mitsuhiko Totsuka.

Norikae Benri Maps are posted in Tokyo Metro and Toei subway stations. When we first put them up, the maps displayed the locations of staircases, elevators, toilets and public telephones. Continually evolving, they now include multilingual information, the location of women-only train cars and other useful details.

We have managed to put information from about 70 per cent of the nation's train stations into a database provided to online train route search engines.

It was one simple occurrence when I was a homemaker that got me interested in inventing.

It happened when my daughter was going to nursery school. I would bring my newborn son along when I attended PTA meetings. I put a pacifier in his mouth since he was always crying, but it would fall out just as quickly. It was then that I thought of the solution of running string through the pacifier's air hole and looping it behind his ears.

Another mom who saw it told me, "You should patent that." I was startled, and ran right to a bookstore. After flipping through a few books, I discovered an organisation that provided support to local inventors and started taking a correspondence course on inventing.

My parents ran a ryokan inn, and I had long seen my mother hard at work. I felt some reluctance to live a life dedicated solely to housework and childcare.

I had lots of different ideas based on the fact that one encounters so many inconveniences when raising children. I also made shoes with toe-catching dividers inside, to help children put each shoe on the proper foot.

One hot summer day in 1995, I put my child in a baby stroller and went out in Tokyo. In one of the stations on the Yamanote Line, I was not able to find an elevator or escalator, and ended up walking the platform from end to end. My baby was exhausted, too. "This never would have happened if I knew where to find them before I got off the train," I thought. But in the midst of my annoyance, I jotted down an idea.

After that, I started leaving my children with my husband on the weekends. I would buy a one-day train pass and go around checking station buildings and guide signs, taking photos along the way. I was thinking of turning my research into a book. I was sometimes mistaken for a suspicious individual and stopped by station employees.

The maximum number of stations I could check in a day was 24. It was more difficult than I had ever imagined. I was not sure if it would turn out to be anything worthwhile, but I kept it up as I did not want the data I had collected to go to waste.

At that time, there were a total of 256 stations between the Teito Rapid Transit Authority (the current Tokyo Metro) and the Toei subway. It took me about five months to check them all.

I sent my book proposal to 74 publishers, but only heard back from three of them. A job information magazine first picked it up, but discussions fell apart midway. "I don't need any money, please just put it out there for the world," I begged. They ended up offering me ¥200,000, but it did not seem proportionate to the work I had put in, so I kept on pitching to other companies.

I got new ideas from a broad range of people. The "map" format that we have now comes from something a certain editor suggested.

I focused on railway companies as our sales targets. The map I made had been introduced in magazines and other publications, and similar ones started to come out. I decided it would have to be adopted at the source: railway companies.

When I first went on sales visits, however, I was passed around among different sections. I did not give up and figured that, if I went all the way around and came back, they would listen to me the second time. I was repeatedly turned down with statements like, "We can't make this because specific train cars will get overly crowded."

However, the Teito Rapid Transit Authority had developed policies aimed at creating an easy-to-understand subway system, and after about two years they decided to adopt my idea. That was big. We started with the Ginza Line, and since we received positive feedback, we expanded to other railway companies.

Born in Hakone, Kanagawa Prefecture, Fukui graduated from the Seijo University Faculty of Economics in 1988 and entered Canon Hanbai (now Canon Marketing Japan Inc.), but quit when she had her first child. Fukui started inventing, and formed a limited liability company called Idea Mama in 1997. She founded the content planning and marketing company Navit Co. in Chiyoda Ward, Tokyo, in 2001.