A sit-in is under way at Hong Kong International Airport

Hundreds of people have joined a mass sit-in at Hong Kong International Airport on Friday in a fresh round of anti-government protests designed to secure international backing for the movement.

Organisers were expecting thousands to show up, and hoped police would respect what they said would be a peaceful protest that was initially billed to last until Sunday.

Ahead of the demonstration, the airport had increased security that led to passengers experiencing delays in reaching departure gates, as airlines warned travellers to arrive early for their flights.

Since the protest started at 1pm in the airport's arrival hall, protesters have been distributing leaflets to travellers explaining the main demands of the movement, which erupted from opposition to the now-abandoned extradition bill. 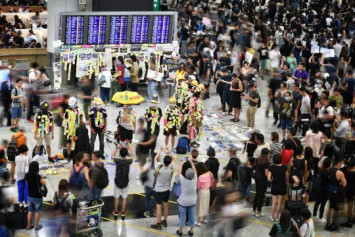 The five demands include a full withdrawal of the draft legislation, implementation of universal suffrage and a retraction of the riot label attached to recent anti-bill protests.

One man with posters stuck to his body, written in Japanese and English, was handing out stickers saying "stand with Hong Kong".

"We don't really have an estimate but we expect thousands to turn up," said the organiser of the sit-in, who gave his surname as Lee.

"We have coordinated with the airport staff and this will be a peaceful rally, so we hope the police can respect that."

Kitty Cheung, 24, who was handing out leaflets to visitors as she took part in the demonstration, said: "I think the international awareness is high already but still the government doesn't want to listen to our voice or opinion. We will keep telling the government what we want." 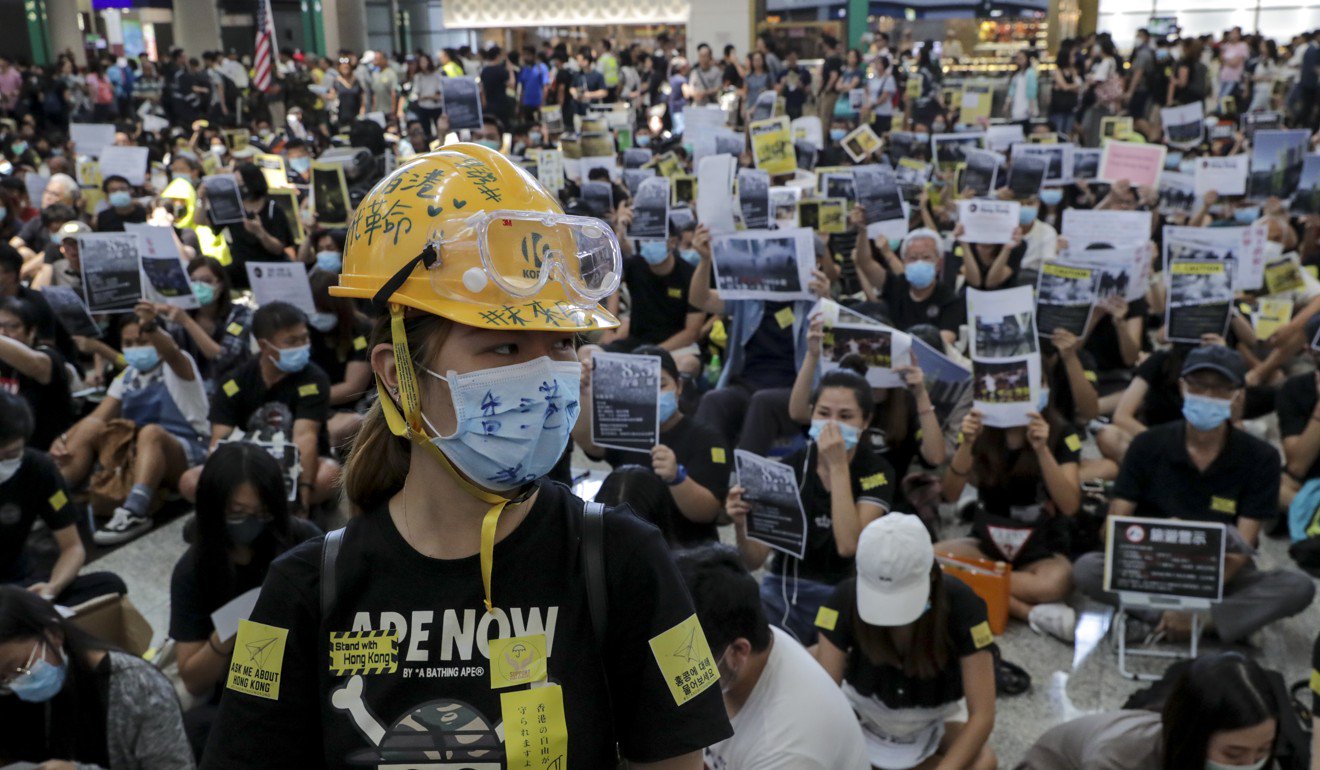 A 24-year-old called Mimi was also helping distribute information on the opposition to the extradition bill.

"Many countries have raised their awareness but our government has done nothing," she said.

"The international awareness is enough for us to be effective."

Mio Tomoda, a Japanese woman who was in Hong Kong on personal business, said she was impressed by the sit-in.

"I have been following the news on the TV and social media, I think it is right that they are fighting back because Hong Kong is not China," she said.

A similar protest held last month at the airport attracted critics including an elderly man who was jostled by protesters after lashing out at a protest sign.

Before the start of Friday's demonstration, temporary security measures were put in place at HKIA's departure hall, as the airport prepared for a large-scale demonstration, despite the absence of any formal protest applications.

In effect, a new restricted area had been created in a large part of the airport that would normally be open to the public.

Passengers were warned to get to the airport early to avoid queues, and to factor in extra travelling time for reaching the terminal. Queues were forming on Friday morning for access to the check-in area as the changes kicked in. 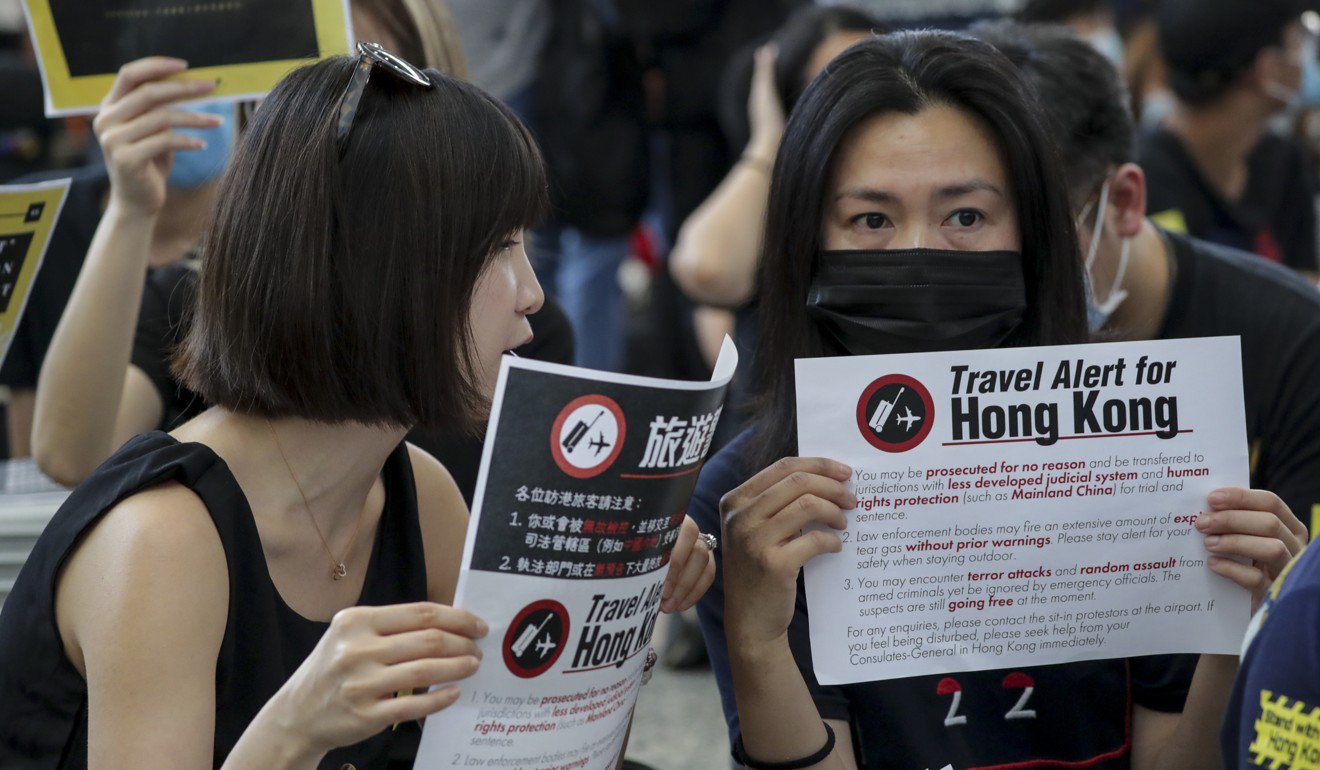 Barriers two layers deep had been assembled, with large posters telling the public that only travellers with an air ticket and travel documentation could pass beyond the start of the check-in desks.

The Airport Authority, which runs HKIA, said the new measures were "to maintain the smooth process of the departure procedures of passengers and the terminal operation."

Only departing travellers with air tickets or boarding passes for flights in the next 24 hours and a valid travel document, or airport staff with proof of identity, would be allowed to access the check-in aisles at Terminal 1 from 6am to 11.59pm, between August 9 and 11, the authority announced.

Security measures would not be strictly enforced, with passengers not yet holding a boarding pass before reaching the new security line able to pass through with proof they were catching a flight that day, according to the Airport Authority.

The measures suggested the airport was worried about protests spilling airside. All tables and chairs at the Starbucks cafe in the departure hall had also been removed on Friday morning.

Only a handful of travellers expressed resentment at the measures, attempting to barge their way through the security without producing a ticket. 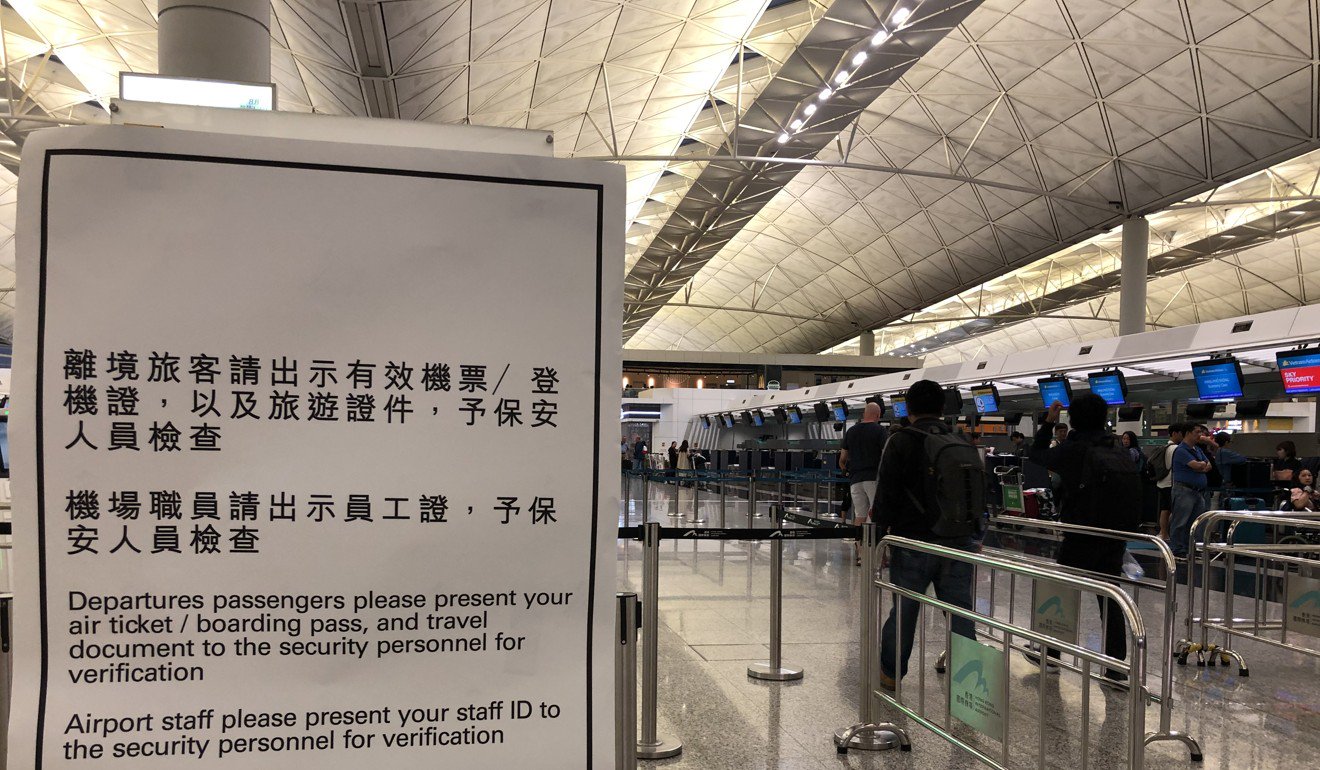 A notice for passengers as they arrive at the airport on Friday ahead of a protest that has heightened security. PHOTO: South China Morning Post

The protest follows the cancellation of more than 250 flights as part of the citywide strike on Monday, which had a knock-on effect into Tuesday.

On July 26, an estimated 15,000 protesters gathered at the airport to try and win international support for the movement against the now-shelved extradition bill, which would have allowed the transfer of criminal suspects to mainland China and other jurisdictions with which the city does not have an extradition agreement.

The measures introduced for Friday and this weekend were not in place for last month's demonstration.

Sharon Wong, 17, who was dropping off a friend, said the deployment of extra security could be viewed with a degree of cynicism for casting aspersions on protesters, who had previously held peaceful forms of demonstration at HKIA.

Student Joshua Tran, 18, agreed, saying the way they were setting up security was "labelling" the protest "not just sitting in an arrival hall, [but] as something will happen, there will be action".

Police said they had not received any applications for permission to hold the rally, and urged protesters to stay peaceful if they went ahead with what would be an illegal gathering.