Protesters in Hong Kong on Wednesday apologised for the disruption they had caused at the city's airport over the past two days that forced the cancellation of hundreds of flights, but steered clear of mentioning their attacks on two mainland Chinese men or the clashes with police.

They also appealed for understanding of their stance, with some saying they would suspend demonstrations at the airport for now.

The statement - signed and issued by "a group of fellow Hongkongers longing for freedom and democracy" - said they felt heartbroken and helpless regarding the overreaction of some protesters on Tuesday, without referring to specific incidents.

On Tuesday night, two mainland Chinese men were assaulted, detained and had their hands bound with cable ties by angry demonstrators who suspected the duo of being undercover agents. One of them was later confirmed to be a journalist with state-run tabloid Global Times.

An officer who had his baton snatched and was being beaten with it resorted to drawing his gun and pointing it at protesters.

The incidents happened on the fifth day of a mass sit-in by protesters who sought to explain to visitors the crisis triggered by the Hong Kong government's proposed extradition bill.

The bill, now suspended, would have allowed the city to transfer suspects to jurisdictions with which it does not have an extradition deal, including the mainland. Street protests have erupted since June, with demonstrators accusing police of using excessive force in response.

"Many Hongkongers are exhausted and have become paranoid after experiencing all these fears and injustice," the statement read.

It said what the protesters did on Tuesday night was an "overreaction" resulting from chronic mental pressure and "provocation" at the scene.

Regarding their earlier actions - which saw thousands of travellers blocked from checking in, leaving many stranded in Hong Kong - the group offered their apologies and promised to reflect on their strategy.

"Being stranded for three days, cancelled flights and forced changes of itinerary are not what you deserve, nor is this what we initially aspired to do," the statement read.

"For the sake of the youngsters' pursuit of freedom, democracy and human rights, please understand our difficulties."

Protesters said they were forced to take their demonstration to the airport as it had become the final safe place for them to express their views.

The administration team of the Telegram group for the airport sit in, which has more than 37,000 members, also announced a suspension of protests but not a complete end to them.

"What happened on Tuesday is not perfect but it does not mean that the sit-in is officially terminated," said the team in a message to the group. 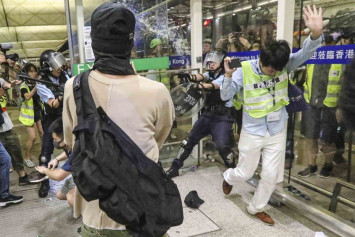 "What we need to do now is to look forward, to maintain confidence in ourselves and our peers, to reflect on our deeds, and to believe that we will perform better next time."

Internet users had fierce debates on the Reddit-like site LIHKG - the de facto virtual command centre of the movement - on Wednesday, with some saying they should reflect on their strategies to win back public support following the widely condemned attack. But others remained defiant.

A group of three protesters - including salesman Spencer Ho, 39 - on Wednesday distributed food to passengers affected by the airport sit-ins. They also put placards on trolleys, reading: "Sorry about what happened [on Tuesday]. We were desperate. Please accept our apology."

Ho said he had left the airport before 5pm on Tuesday and, having always endorsed nonviolent forms of protest, was shocked and disappointed about what happened later at night.

"There was no bloodshed or arrests [during earlier sit-ins and protests] at the airport, which is a very good setting to gain the international spotlight at a relatively small cost," he said. "I felt a bit frustrated when the attacks [against the two mainlanders] happened."

But Ho insisted he would not blame the protesters as he understood their emotions.

"The Occupy campaign [for greater democracy] failed in 2014 because there was a split among protesters," he said, adding unity would bring the utmost power to the movement.

Labour Party lawmaker Fernando Cheung Chiu-hung, who was on the scene as a mediator on Tuesday night, said he disagreed with the protesters' actions as they were the opposite to what the movement was trying to achieve.

"I have made my stance clear. There is a wide spectrum in the movement as it is normal for people to come up with different approaches out of moral or strategic considerations, but we should always bear our goals in mind," he said.

"We are trying to defend our freedoms, personal safety and rule of law, and our means should never go against our goals."

Council Front lawmaker Claudia Mo Man-ching, convenor of the pan-democratic bloc, said the way the two men were treated and the blocking of travellers trying to board planes were wrong. 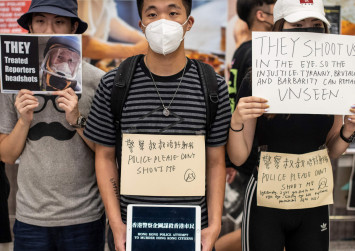 Mo described the situation at the airport on Tuesday as "extremely dangerous" as the young demonstrators "boiled over".

She condemned their actions but held off criticising them personally, saying she did not know all the facts.

"The problem is we don't know exactly who did it or why," Mo said. "Could there be agents, provocateurs? Were [the protesters' actions] being incited?"

Mo noted that the police had admitted that they had sent undercover agents into the crowd of protesters, a move that caused panic among those in the movement, she said.

On Sunday, black-clad undercover officers arrested a number of protesters in Causeway Bay.

Mo also said she would not dissociate herself from protesters and noted their apology.

Mrs Lau, 33, a housewife, arrived at the airport on Wednesday afternoon, folding paper flowers with the words "we are so sorry" written on them, as well as the popular slogan "Liberate Hong Kong. Revolution of our times".

She said the flowers were designed by a friend of hers as way of apologising to affected residents and tourists, especially after the attacks on mainland people on Tuesday night.

"What happened was not ideal, and there is much room for improvement," she said.

"But I have faith in the youngsters who will learn from their mistakes. It is darkest before the dawn. I hope we won't be engulfed by darkness."