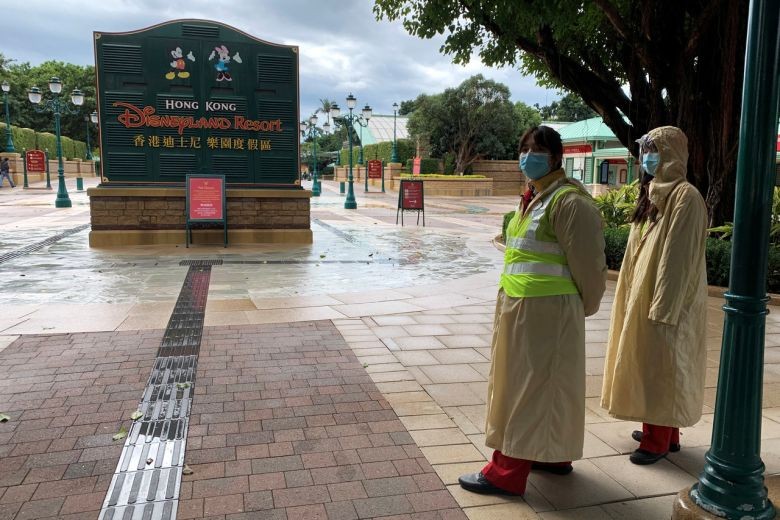 Employees wearing protective masks stand outside the Hong Kong Disneyland theme park that has been closed, following the coronavirus outbreak, on Jan 26, 2020.
Reuters

Hong Kong's Disneyland announced it was shutting its doors on Sunday until further notice over the deadly virus outbreak in central China, a day after city authorities classified the crisis as an emergency.

The park said it was taking the step to protect "the health and safety of our guests and cast members" and said refunds would be given.

On Saturday, Hong Kong classified the outbreak as an "emergency" — the city's highest warning tier — and announced ramped-up measures to reduce the risk of further infections.

The move came as city leader Carrie Lam faced criticism in some quarters over her administration's response to the crisis, including calls to halt, or limit, arrivals from the Chinese mainland where the epidemic began.

Five coronavirus patients connected to Wuhan were being treated in Hong Kong, and more than 100 others were suspected of having the viral pneumonia.

Of the five people who have tested positive for the virus in Hong Kong so far, four arrived via a newly built high-speed train terminal which connects with the mainland.

Lam has resisted closing the border, saying the crisis is not yet at a point where such a drastic measure is needed.

But she has announced all mainland arrivals must now sign health declaration forms.

Schools will be closed until mid-February. The city is also suspending flights and train services to Wuhan.

A series of public events, including a Chinese New Year gala and next month's marathon have also been cancelled.

On Sunday, the nearby gambling hub of Macau announced three more cases of the novel coronavirus, bringing its total to five.

All three new cases were women who came from the central Chinese city of Wuhan, the epicentre of the epidemic. One of the women had arrived in Macau via Hong Kong, authorities said.

The closure of Disneyland and Ocean Park will pile fresh misery on Hong Kong's tourism, leisure and retail industries which have already been battered by more than seven months of often-violent pro-democracy protests.

Combined with the US-China trade war fallout, the protests have helped tip Hong Kong into recession and the virus outbreak has only compounded the city's economic woes.

Shanghai's Disneyland also closed from Saturday in response to the coronavirus outbreak.

Nearly 300 people were killed in the city by Severe Acute Respiratory Syndrome (Sars) in 2003, a tragedy that left a profound psychological impact on one of the most densely populated places on earth.