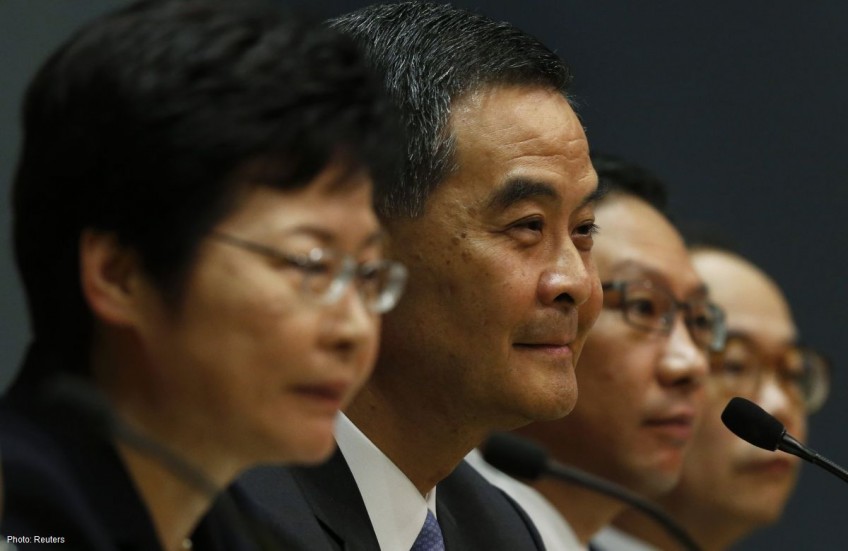 Discontent has flared in the semi-autonomous Chinese city over what is seen as increasing interference by Beijing, notably its insistence that it vet candidates before the next leadership election in 2017.

Chief executive Leung Chun-ying said in the report, submitted to China's National People's Congress (NPC) or parliament, that "there is a need to amend the method for selecting the CE (chief executive) in 2017 in order to attain the aim of universal suffrage".

Currently the leader is chosen by a 1,200-strong pro-Beijing committee.

China says voters can elect the next chief executive but candidates must be picked by a nominating committee - raising fears among democracy advocates that only pro-Beijing figures will be allowed.

Leung - saying he was citing the findings of an official public consultation period on reform- said "mainstream opinion" believed that a nominating committee should choose candidates, in line with the city's mini-constitution known as the Basic Law.

Reflecting another Chinese stipulation, he added that "the community generally agrees that the CE should be a person who 'loves the Country and loves Hong Kong'."

Pro-democracy activists are pushing for the public to select candidates, which China has ruled out.

Campaign group Occupy Central and its allies have said they will take over the streets of the Central business district if public nomination is refused.

An informal poll organised by Occupy in June saw almost 800,000 choose from three options, all of which included public nomination of candidates.

That poll was followed by a pro-democracy march on July 1 which attracted tens of thousands.

"It does not fully reflect the yearnings of the Hong Kong people," he said.

The former British colony was handed back to China in 1997 under an agreement which granted rights such as freedom of speech and an independent judiciary.

Leung admitted there were "divergent" opinions on how the next leader should be elected, including "considerable views" that civil nomination should be included.

But he added that "professional bodies of the legal sector and other members of the public" had said that would not be in line with the Basic Law.

Leung's report has been sent to China's NPC Standing Committee, which meets next month and must approve any reforms.

There were angry scenes in Hong Kong's legislature Tuesday when the government's number two, Carrie Lam, announced the findings of the public consultation which polled more than 120,000 individuals and groups.

Radical protester and lawmaker Leung Kwok-hung threw an inflatable hammer and a birdcage with the words "civil nomination" written in Chinese inside it towards Lam.

"I want civil nomination," Leung shouted repeatedly as he was hauled out of the chamber.

Another radical lawmaker Albert Chan ripped up a copy of the report, shouting "Fake report, fake consultation!" as he was removed.

The submission of Leung's report is the first in a five-step process on electoral reform.

"The Standing Committee of the National People's Congress has final say on whether to revise the election methods of Hong Kong SAR's chief executive in 2017 and its Legislative Council in 2016" the website of state news agency Xinhua cited the NPC as saying Tuesday, after receiving the report.