Hong Kong's embattled leader is facing tremendous pressure to meet public expectations on her policy address next week amid a continuing protest crisis as insiders revealed that officials were struggling to come up with impactful "big bang" measures.

The revelations came as sources confirmed that contingency plans were in place for Chief Executive Carrie Lam Cheng Yuet-ngor's annual speech to be delivered through a recorded video message, as the Legislative Council meeting next Wednesday could be cancelled if protesters laid siege to the chamber.

Sources also said housing and social welfare initiatives were likely to be key planks of Lam's third policy blueprint. Housing measures would include another push for a starter-home scheme she launched two years ago and a limited resumption of the Tenants Purchase Scheme to help public housing tenants own their homes.

Insiders also hinted that Lam had considered more eye-catching moves, such as reducing the number of mainland Chinese relocating to Hong Kong under the so-called one-way permit scheme to appeal to residents weary of new immigrants. But in the end, she decided not to go ahead with the move.

The controversial scheme allows up to 150 mainlanders a day to move to the city and localist groups have blamed it for the shortage of public housing. 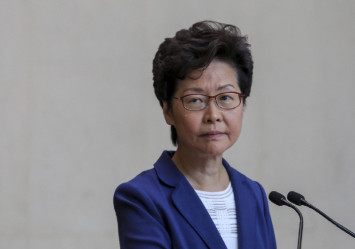 A source close to the government said Lam would not announce a full-scale resumption of the scheme to sell public rental flats to existing tenants, fearing it would shrink supply and lengthen the waiting time for those queuing to be tenants.

"The government will only resume the sale of about 40,000 unsold flats in 39 public housing estates listed in the scheme which was shelved 13 years ago," he said.

Another way to boost home ownership would be to provide more starter homes, the sources confirmed.

The scheme, first announced in 2017, aimed at inviting private developers to build 1,000 affordable homes for the sandwiched class. But the proposal was delayed until the Urban Renewal Authority (URA) took up the mission and launched its 450-unit plan last year.

Now the URA has been tasked to roll out another round of starter homes this year, and would likely choose To Kwa Wan, Sham Shui Po or Tai Kok Tsui as the designated site, a source said.

On social welfare, Secretary for Labour and Welfare Law Chi-kwong revealed in a media briefing Lam would announce raising the places for on-site preschool children rehabilitation services from the current 7,000 to achieving zero waiting time in two to three years' time for children aged below six with special needs such as speech and autism therapy. 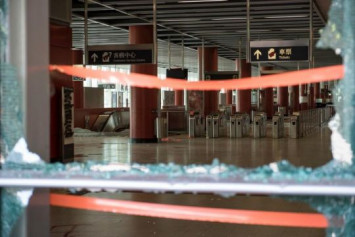 On one-way permits, another source said Lam and her top officials had discussed the possibility of revamping the scheme, including reducing of daily quota. The issue was also raised with Beijing, the sources said, but the central government disagreed with the idea.

"It's worth exploring the possibility of changing the system to improve the relationship between Hong Kong people and the mainland," the source said. "But it got nowhere."

With hopes running high, a source close to the government said he was worried there would be a mismatch of public expectations versus what the government could deliver.

"Officials are drumming up an impression the policy address will be unusual and this will enhance public expectation of a groundbreaking announcement."

Another issue the government was struggling over was the logistics of the address.

If protesters besieged Legco, as they did on July 1, Lam might not be able to deliver her policy address in person.

A source said she would then announce it on a live feed, or through a taped video on October 16.

Article 64 of the Basic Law, the city's mini-constitution, only states the Hong Kong government must "present regular policy addresses to the council", while Section 13 of Legco's rules of procedure simply stipulates that "the chief executive shall deliver a Policy Address to the council, if he/she so wishes, at the first meeting of a session."

There is no stated requirement of a date or location.

Read Also
Anger, hurt and love for city: How Hongkongers feel after months of chaos 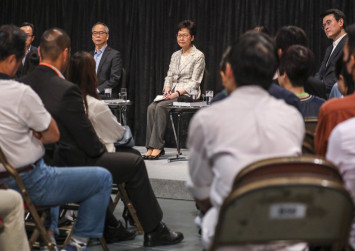 A second source said the government had examined all relevant legal provisions and concluded Lam could choose not to deliver the address at Legco.

Civic Party vice-chairwoman Tanya Chan, convenor of the pan-democratic lawmakers, said: "We don't have any expectation for Lam's governance, but it is still her job to tackle the city's housing problems."

Pro-establishment lawmaker Michael Luk Chung-hung said the pan-democrats should call for protesters not to besiege the legislature.

"Please don't stop Lam from responding to the people's livelihood woes," he said.

Former Legco president Jasper Tsang Yok-sing agreed the council's rules allowed for the chief executive not to deliver the address in person. Asked whether such a move would harm the government's authority, he asked: "Is there any authority left?"

Commentators questioned if Lam would consider delivering her policy address in other venues, such as the Hong Kong Convention and Exhibition Centre in Wan Chai. But sources said the issue was not about alternative venues.

She only unveiled the full documents after making relatively shorter speeches which lasted for 40 minutes. But a source said Lam was likely to read out the full address this time, as she said it would not be "very elaborate, very comprehensive".