The video, filmed from above, claims to show at least 20 riot police surrounding a man in a yellow vest and one officer kicking him.

Hong Kong police have denied accusations they kicked a man during a rally in Yuen Long on Saturday and challenged witnesses to come forward, saying a video filmed by a local only showed officers kicking "a yellow object".

Police, who added they had seen other videos which showed no assault, were referring to the video filmed by a resident from a flat at Fung Yau Street North, which purported to show at least 20 riot police surrounding a man in a yellow vest, and one officer kicking him.

Local volunteer group "protect the children", which is often seen on the front line of protests trying to negotiate with police, said the man was a member and had suffered injuries consistent with being kicked.

However, acting senior superintendent of New Territories North, Vasco Williams, denied the accusation at a press conference on Monday and said the man had been arrested for assaulting police.

"You mentioned a video which shows what appears to be an officer kicking a yellow object on the ground, we don't know what that object is, but there are other videos which show no assault," Williams said. 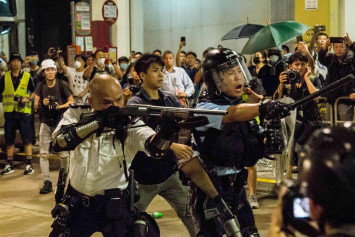 However, police did not show the film Williams mentioned at the press conference. Williams said he had seen clips that proved the resident's video was "doctored".

"The video was very out of focus, it could be an object, person, a bag or a vest," Williams said.

When asked to show the film, he said it could be found on Facebook and told reporters to find it themselves.

On Sunday night, the Good Neighbour North District Church said it was waiting for the volunteer to be released to take further action.

After Williams' remarks, the church posted a response on its Facebook page.

"We spoke to the local residents, what they saw was our volunteer and not an object," it said.

Over the weekend, police arrested 82 people on a range of charges including unlawful assembly, possession of offensive weapons, and desecrating the national flag.

Three of the arrested were "self-proclaimed first-aid workers" and two of them were found with laser pens, Tse said.

Meanwhile, a Post video producer was hit on the left arm with a baton on Sunday while covering protests in Sha Tin.

The incident happened around 6.20pm, after police fired their last round of tear gas in New Town Plaza. 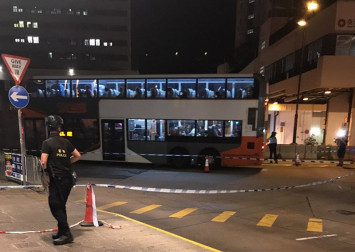 As protesters retreated and ran up a platform in the complex to get to the riverside, the Post employee followed the crowd up a flight of stairs, and pressed himself against the wall to make way for others, when elite officers from the tactical squad, known as Raptors, rushed up from behind him.

One of them hit him on the left arm with a baton, yelling an obscenity at him.

The baton left a red mark on the producer's arm, but he could not detect the identification number on the officer as the latter had ran off by then. The producer was wearing a press vest and carrying a camera.

However, Tse said the force did not have a record of batons being used at that time.

"Police do not target reporters intentionally, I can advise that no matter reporters or self-proclaimed first aiders do not come in direct contact with police and keep a safe distance from police officers in operation mode," Tse said.