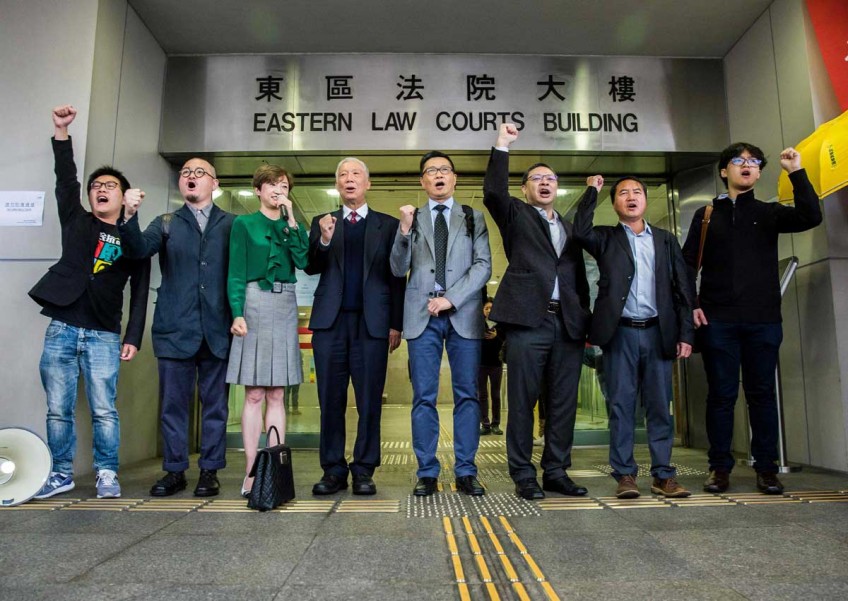 A sign bearing an illustration of an umbrella, which has come to be associated with Occupy Central, stands in Causeway Bay, one of the three main protest sites in Hong Kong.
The Straits Times

Nine leaders of Hong Kong's 2014 democracy protests appeared in court on Thursday after their surprise summons, charged with inciting the street occupation that paralysed parts of the city for months in what some expect to be a long legal battle.

The nine were charged on Monday, just a day after a new Beijing-backed leader, Carrie Lam, was chosen as the city's next leader, seen by many as a worrying sign after she had vowed to heal divisions in the Chinese-ruled city and unite society.

The protest leaders, including the "Occupy Central trio" of Benny Tai, Chan Kin-man and Reverend Chu Yiu-ming, entered the magistrates' court smiling and shaking hands with a few dozen supporters, some holding yellow umbrellas, the symbol of the 2014 civil disobedience movement.

Six others, including two legislators and two former student protest leaders, were also charged with crimes related to public nuisance.

The nine told the court they understood the charges, but the hearing was largely procedural and didn't require them to enter pleas.

The case was adjourned until May 25.

Veteran pro-democracy politician and barrister Martin Lee, representing five of the defendants, requested the case be transferred to the high court instead of the district court, so that the nine could be tried by a jury. "After all, the allegations are of a public nature," Lee said.

The judge says it was up to the prosecution to decide which court tries the case.

Outside the court, about a dozen pro-China protesters jeered at the protest leaders, cursing them in colourful Cantonese to get stabbed, while slapping photos of them with flip-flops.

The charges carry a maximum sentence of seven years, Tai said, adding the activists might plead guilty, in the spirit of civil disobedience.

The former British colony, governed under a "one country, two systems" formula, was promised a high degree of autonomy and the right to select its chief executive when it was handed back to Communist Chinese rule in 1997.