Anti-government protesters gather outside the police headquarters in Wan Chai on June 26.

A protester who spat at an officer while taking part in an unlawful anti-government rally outside the police headquarters was jailed for 10 months on Tuesday, marking the heaviest sentence since the civil unrest broke out in June.

Ng Ting-pong, 43, had earlier pleaded guilty to one count each of assaulting a police officer, taking part in an unlawful assembly and criminal damage. On June 26, he had joined more than 1,000 protesters to besiege the police headquarters in Wan Chai.

Ng, who is unemployed, was the first protester convicted of unlawful assembly since the social unrest - sparked by discontent over the now-withdrawn extradition bill - erupted in June.

Prosecutors told Eastern Court that at around 10.52pm that day, he tied a water barrier to the gate of a side exit at the east wing of the police headquarters, in an attempt to barricade the premises.

The court heard that Senior Superintendent Mak Man-yu kicked the barrier and told the defendant to stop, only to be spat at in the face.

Prosecutors also accused Ng of spraying paint on a glass window at the main entrance to the headquarters twice, an act captured by security cameras.

Ng's lawyer Linda Wong Shui-hung said in mitigation that the officer in the case suffered no major injuries. She added her client should not be held responsible for the unlawful assembly on that day.

Passing sentence on Tuesday, magistrate Veronica Heung Shuk-han said the unlawful assembly involved a considerable degree of violence which amounted to "a direct attack on the rule of law".

She said Ng and more than 1,000 protesters had paid no regard to the huge risk of violent clashes when they attempted to incapacitate police by blocking the headquarters' exits.

The magistrate also found Ng's act of spitting an insult to law enforcement officers and an attack on their pride.

"It was filthy, sleazy and despicable. The court cannot condone this type of offence," she said.

Heung ordered the defendant to pay the force HK$1,670 (S$290) for cleaning the glass window vandalised. 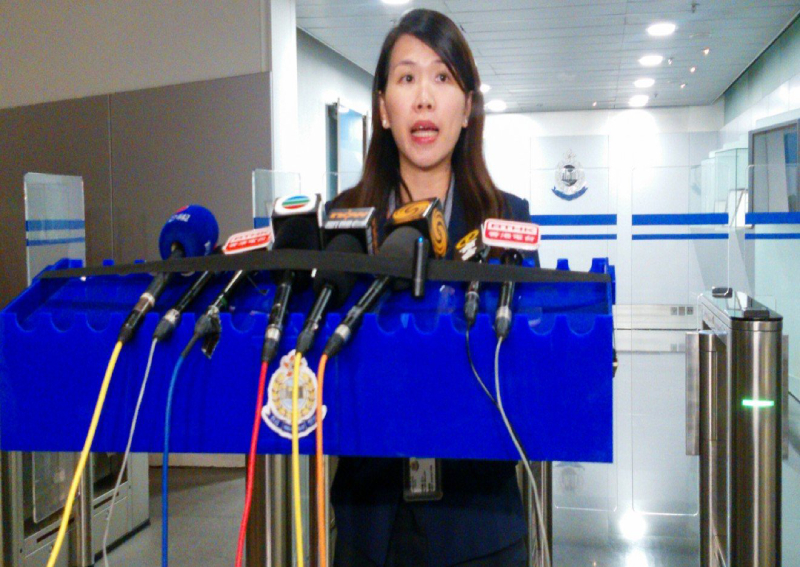 Chief Superintendent Wu Miu-yee of the commercial crime bureau said police welcomed the court's ruling, which upheld the rule of law by passing a stringent sentence.

At Kowloon City Court, three people charged over protests - including the first expatriate brought to the court - saw their charges withdrawn by the prosecution.

Jethro Santiago Pioquinto, a 36-year-old Filipino dancer, was charged alongside photographer Lee Wing-ho, 22, for taking part in an unlawful assembly at the junction of Nathan Road and Fife Street in Mong Kok on August 3.

Bank clerk Leung Hei-wing, 24, faced the same charge in a separate case, after she allegedly took part in another unlawful assembly one block away from the pair on the same day.

A justice department spokesman said the decision was made after it was found there was insufficient evidence to support a reasonable prospect of conviction against the trio.