Groups of radical anti-government protesters went on the rampage across Hong Kong on Wednesday night, this time venting their rage over the shooting of a school pupil during violent clashes a day earlier.

Following the protest violence and chaos that marred China's National Day celebrations on October 1, thousands took to the streets again, with students boycotting classes and demonstrators taking over shopping malls to express outrage over the first use of lethal force by police in nearly four months of civil unrest.

Police fired tear gas to disperse a large number of diehard protesters in Tsuen Wan, where they unlocked the turnstiles at the MTR station and spray-painted graffiti in the premises, blocked traffic and dismantled railings to set up road blockades.

Others trashed Bank of China ATM facilities and vandalised a China Mobile shop in the district.

It was more of the same at Tseung Kwan O MTR station, where they invited commuters to go though the turnstiles without paying.

Roads were blocked in districts ranging from Wong Tai Sin to Causeway Bay. A Wong Tai Sin MTR exit was flooded with water from a damaged fire hydrant.

The chaos prompted the MTR to shut down Po Lam and Hang Hau stations at 11.30pm to ensure the safety of passengers and staff. At midnight, Tai Wai, Che Kung Temple and City One stations were closed early. 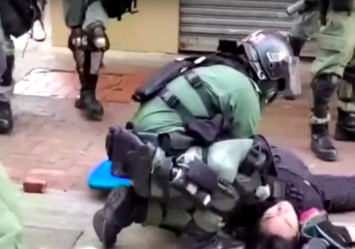 In the vicinity of Tai Wai MTR station, police raised a black flag twice - on either side of midnight - warning of the use of tear gas following a confrontation. The crowd, mostly locals, had objected to the presence of about 100 riot police. A man was arrested in the chaos.

As police began making their exit in several vehicles at 12.15am, some in the crowd threw large objects including rubbish bins at them. Officers jumped out and fired two sponge grenades at the crowd, without raising a warning flag. They left soon after.

Earlier on Wednesday, police revealed at a press conference that besides shooting 18-year-old Tsang Chi-kin in the chest, officers had fired three of the five other live rounds they used on Tuesday at protesters.

They opened fire twice on protesters who were throwing petrol bombs at them on Sha Tsui Road in Tsuen Wan, but no one was hit.

Another missed shot was fired in Wong Tai Sin under similar circumstances. The remaining two live rounds were fired - but aimed skywards - in Yau Ma Tei.

Deputy Commissioner of Police Chris Tang Ping-keung insisted that the officer who shot Tsang had made the right decision as his own life as well as those of his colleagues were threatened.

Tsang's lawyer, Ng Gene-bond, said: "My client has undergone surgery and is now still receiving treatment in the intensive care unit. At the moment his life is not in danger in hospital." 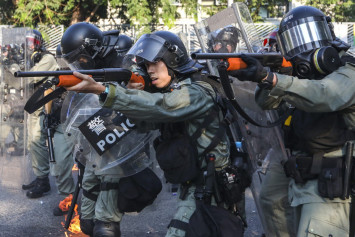 Earlier in the day, hundreds marched on the streets in Central in a spontaneous protest at lunchtime over Tsang's shooting, bringing traffic in the business district to a standstill.

Kathy Chau, 26, who works for a multinational finance firm in Central, said she joined the march even though her company did not support the protests.

"Doing the right thing is more important to me than worrying about what my boss or colleagues think of me," Chau said.

They included about 50 students who boycotted classes and joined a peaceful sit-in at a car park outside the school.

Kwan Long-ching, 17, a Form Six student from nearby Liu Po Shan Memorial College, said he believed the shooting was unreasonable, although he did not completely agree with protesters attacking police. He also said he was terrified by Tuesday's incident.

"The next person who may get shot could be me or any of my friends," he said. 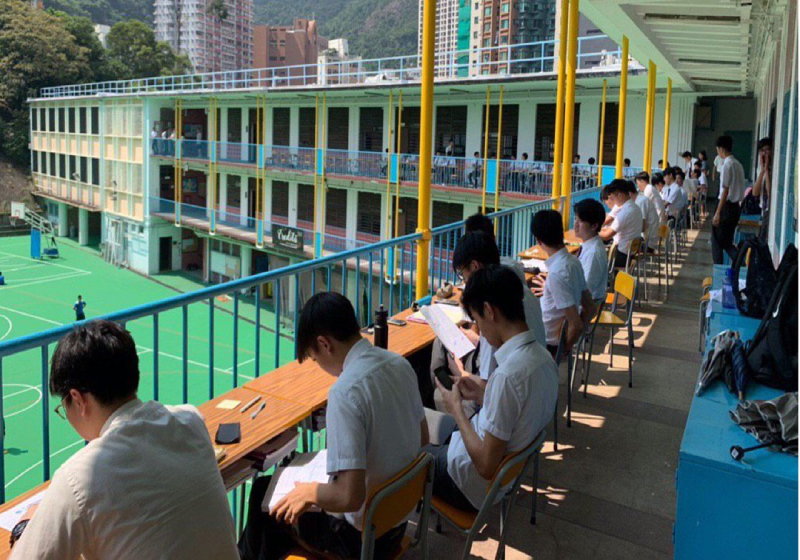 The school's principal, Tse Yun-ming, expressed sympathy for Tsang's family, and had an hour-long meeting with alumni. But the session ended in acrimony after Tse and two vice-principals faced pressure to condemn the officer's use of force.

About 70 students from Wah Yan College, a prestigious secondary school, also joined in class boycotts to protest against the shooting.