The damage caused to railway operator MTR Corporation by anti-government protesters is worth hundreds of millions of Hong Kong dollars.

Two Hong Kong students were sentenced to correctional training and ordered to pay around HK$285,000 (S$50,000) in total for vandalising three rail stations during an anti-government protest about three months ago.

College student Edgar Kwok, 17, and another 15-year-old student, who cannot be named for legal reasons, admitted to defacing three Light Rail stations in Tuen Mun during the early hours on September 7.

Acting Principal Magistrate Cheung Kit-yee ordered each of the two to bear half of the compensation, totalling HK$285,447, to the MTR Corporation for damaging the facilities.

The pair, who has pleaded guilty to three counts of criminal damage, was sentenced to rehabilitation centre at Tuen Mun Court on Tuesday, the first sentencing on vandalising rail facilities since protests against the now-withdrawn extradition bill erupted in the city in early June.

Cheung said a short-term custodial sentence was appropriate given the serious nature of the offence, which had caused considerable inconvenience to local residents who were stopped from taking the public transport because of the damage.

Anti-government protesters have frequently targeted Hong Kong's railway operator, accusing it of bowing to Beijing. They have damaged MTR facilities, thrown objects onto rail tracks and set fires inside the stations and at their exits.

Papers submitted to the Legislative Council's railway subcommittee revealed that 147 of the city's 161 MTR stations had been subject to vandalism between June 12 and November 24, causing damage worth hundreds of millions of Hong Kong dollars. 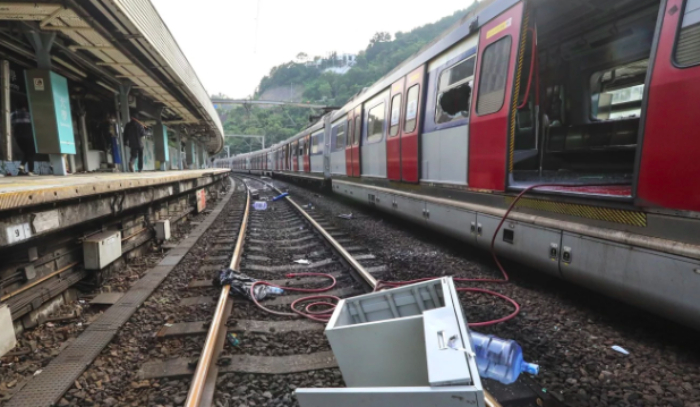 Defence lawyers pleaded that the two youngsters were remorseful for their acts.

Kwok's lawyer Kenny Chan Lee-lung said his client, who suffered from attention deficit hyperactivity disorder (ADHD) and anxiety disorder, had been unsettled by the news of young people committing suicide in his neighbourhood during the anti-government movement.

He admitted he had been reckless and wanted to apologise in public, Chan added.

Patrick Cheung Wai-sun, representing the 15-year-old, told the court the pupil was suffering from Asperger's disorder and attention deficit disorder. Cheung said he had committed the crime out of impulse. 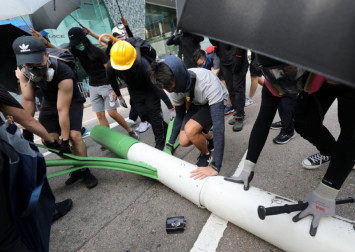 Passing sentence, magistrate Cheung said the offence was premeditated as the duo had worn hats and masks to cover up their identities.

She said non-custodial sentencing options, such as a probation order or community service order, would not reflect the seriousness of the case.

"Notwithstanding a noble cause or the freedom of expression, one should not resort to unlawful means to express his or her views," she said.

Also in Tuen Mun Court, security guard Lau Ka-chun, 26, admitted to possessing offensive weapons in a public place after he was caught carrying a dagger, an axe, a machete, and a military knife during an anti-government protest in Yuen Long on September 21.

Prosecutors said Lau and about 100 protesters gathered at the junction of Fung Kam Street and Fung Yau Street North and chanted slogans at 9.50pm that day, before he was intercepted and arrested by police.

In mitigation, Lau's lawyer Jessica Chan Wing-yin said the weapons were the belongings of another unidentified protester who had asked Lau to carry them for him that night. "He had no idea this act would make him regret for the rest of his life," she said. 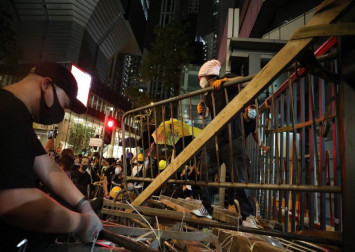 Lau will receive his sentence on December 19, awaiting a background report.

The Public Order Ordinance stipulates that a defendant aged 25 or above who is convicted of possessing offensive weapons in a public place shall be jailed for no more than three years, but magistrate's courts can only pass a maximum prison sentence of two years.

Over at West Kowloon Court, Nepali student Anubhava Ale, 16, was charged with behaving in a disorderly manner in a public place and committing criminal damage.

Prosecutors said Ale had intended to "provoke a breach of the peace" by placing barricades at the junction of Nathan Road and Argyle Street in Mong Kok early on Monday morning. He was also accused of damaging a traffic light at the location.

He was granted a HK$1,000 cash bail by Principal Magistrate Peter Law Tak-chuen, on the conditions he obeyed a travel ban and a curfew. He will appear in court again on January 14.