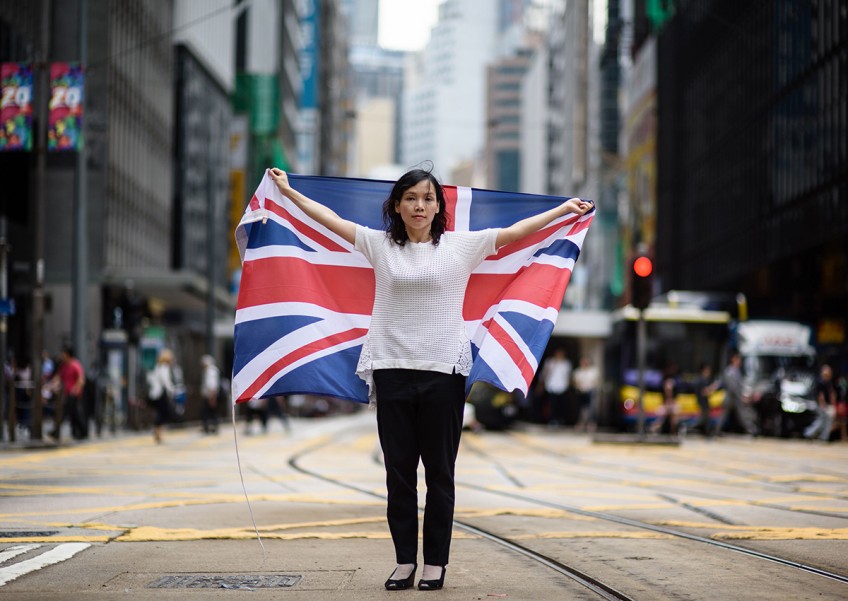 In this picture taken on May 18, 2017, artist and designer Alice Lai, 39, who heads a small protest group called HK-UK Reunification Campaign, holds the British national flag on a main road in Hong Kong.
AFP

HONG KONG - Many Hong Kong residents, worried about growing encroachment by Beijing as the financial hub marks 20 years since its return to China, are rushing to secure British passports as a safety net in the case of social unrest or the erosion of civil liberties.

British government data, diplomatic sources and testimonials from six Hong Kong residents paint a picture of rising anxiety over the future and growing mistrust of Communist Party leaders in Beijing, especially among the younger generation.

Britain returned Hong Kong to Chinese rule on July 1, 1997, under a "one country, two systems" formula which guarantees wide-ranging autonomy and judicial independence. China has promised Hong Kong's capitalist system will remain unchanged for"at least" 50 years, but it has not clarified what happens after that.

Hong Kong foreign passport holders and diplomats interviewed by Reuters say the rush for overseas protection has been fuelled by the territory's divisive battle for democracy, especially the"Occupy" street protests of 2014, and increasing calls for independence, a red line for Beijing.

The abduction of several Hong Kong booksellers, who sold publications critical of China's leaders, by mainland agents has also shaken confidence in Beijing's promise of non-interference, they say.

"We will be coming under Chinese rule and we don't know what will happen in 2047 if there is political instability," said 25-year old Hong Kong resident Dennis Ngan. "I am preparing for the worst."

Like many of his peers, Ngan plans to renew his BN(O), or British National (Overseas), passport, a special status passport granted to Hong Kong permanent residents prior to 1997. More than 37,500 BN(O) passports were issued last year, a 44 per cent jump on 2015 and the highest number for more than a decade, government data shows.

"A KIND OF SECURITY"

BN(O)s do not automatically confer right of abode in the United Kingdom, but holders can visit visa-free for six months and are entitled to British consular protection. "The BN(O) passport is a kind of security, like insurance. The renewal is not about having a travel document, it's about being eligible for rights or protections," said Ngan.

The British Home Office rejected Reuters' requests for data on BN(O) passports issued in 2017 and on the number of BN(O) holders who have sought full British citizenship.

However, diplomatic sources in Hong Kong said they were seeing a broader rush for foreign citizenship which they attributed to concerns over the territory's future. "People are worried. We understand that embassies all over Hong Kong are getting lots of queries from people seeking citizenship," said one senior diplomat at a major consulate.

The data, the latest available, was requested from each government by Reuters.

One of the abducted booksellers, Lee Bo, drew international attention because he was a dual Hong Kong and British citizen, prompting London to rebuke China for a "breach" of Hong Kong's law.

"If things get really bad here and people need to seek asylum, I hope the British take that into consideration and listen," said Kevin Hla, 40, a Myanmar-born IT professional. He has lived in Hong Kong most of his life but refuses to get a Hong Kong passport, preferring instead his BN(O) which he renewed last year.

"It gives me an option to escape. I don't trust the Chinese government." According to a University of Hong Kong survey released last week that polled 120 youths, only 3.1 per cent of those aged between 18 to 29 identified themselves as "broadly Chinese".

The figure stood at 31 per cent when the half-yearly survey started 20 years ago. "I feel as though I'm half a British citizen," said 30-year old Daisy Wong, who hopes to use her BN(O) status to secure British residency so her children can be born there.

"The British government is good, they've given people this choice."

Still, some say such faith may be misplaced and point out that the British did nothing to promote democracy until the dying days of more than 150 years of colonial rule. Britain, looking for new trade partners as Brexit approaches, is also keen not to upset China, the world's second-largest economy.

"Are we more likely ... to take a firm line with China - on trade issues, on economic issues, on political issues - on our own than we would within the EU? I don't think that the outlook outside the European Union is one in which we are more likely to behave honourably towards Hong Kong than we have inside."