A handout photo. The outside of a Kwong Wing Catering location In Tsim Sha Tsui.

The outspoken owners of a popular Hong Kong restaurant chain who supported anti-government protesters have doubled down on their insistence that staff would only serve Hongkongers "and friends from Taiwan", despite being told it was unlawful to do so.

Kwong Wing Catering, which operates a popular chain of local diners, posted notices at several of its outlets late last month that said staff did not speak Mandarin, a stance interpreted as it deterring customers from mainland China during the coronavirus outbreak.

Late on Sunday, the owners said staff would continue to only speak Cantonese, despite the Equal Opportunities Commission advising it to remove the notices.

On Saturday, the restaurant claimed it had been told during a call with the commission that it would be prosecuted if it served some groups of people and not others.

In a Facebook post the owners vented their anger at the Hong Kong government, and repeated their claim that none of their waiters could speak Mandarin.

"I just talked to our district managers, and realised that all our waiters can't speak Mandarin," one wrote. "So, from today [Saturday] orders can just be made in Cantonese and they [waiters] will not explain the menu. We are sorry for the inconvenience."

But on Sunday, the commission denied issuing any sort of warning to the restaurant's owners.

It said a complaint had been made alleging that the restaurant had put up a notice that was discriminatory towards some customers. It said it called the restaurant and advised it to remove the notice.

"During the call, the officer did not make any sort of warning nor mention suing the restaurant. Any allegations of otherwise, or doubts about the commission's handling of the matter are misguided," the statement said.

The commission added that it was unlawful to discriminate against, harass or vilify a person on the grounds of "race", which referred to the race, colour, descent, national or ethnic origin of the person. 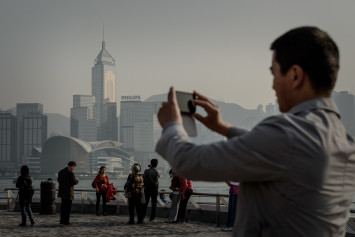 The commission said it understood that the coronavirus, which originated on the mainland, was causing anxiety, but discriminatory language and behaviour would only serve to fuel division and conflict, rather than bringing the epidemic under control.

So far more than 70,000 people have been infected with the virus on the mainland, and nearly 1,800 have died. Hong Kong reported its 57th confirmed case of infection of Sunday, and there has been one fatality in the city.