The attack on the Form Two student in Mong Kok was captured in a video that went viral on Wednesday.

Police said the teen was set upon at the games centre in the Golden Era Plaza shopping centre in Sai Yee Street, shortly before 10pm on May 16.

CCTV footage showed the boy lying on the floor with his arms raised to protect his head during the attack launched by at least five men, who were wearing surgical masks.

One of the attackers, wearing a white T-shirt and shorts, battered the victim with a “caution wet floor” sign as the others kicked the boy.

After the plastic sign shattered into pieces, the man picked up a fire extinguisher and used it to repeatedly hit the victim.

The attack ended when staff in the shopping centre approached the gang. A report was filed to the police but the attackers fled before officers arrived.

The victim was unconscious when emergency personnel arrived, according to police.

He suffered injuries to the head and arms and was taken to Queen Elizabeth Hospital in Yau Ma Tei, where he later regained consciousness. 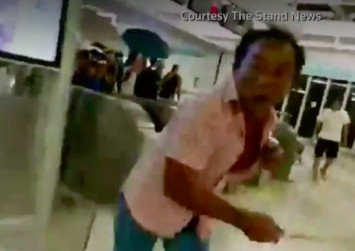 As of noon on Thursday, the victim was in serious condition in hospital, according to a government spokesman.

A police source said the attack was linked to a dispute between the victim and one of the attackers over a teenage girl.

“We have identified some of the attackers who are suspected Wo Shing Wo triad members,” he said. “Police are still hunting them.”

Police are treating the case as “wounding”. Anti-triad officers from Mong Kok Police Station are handling the case. No arrests have been made.

According to official statistics, police handled 292 reports of wounding in the first three months of this year, up 29.2 per cent from 226 in the same period last year.