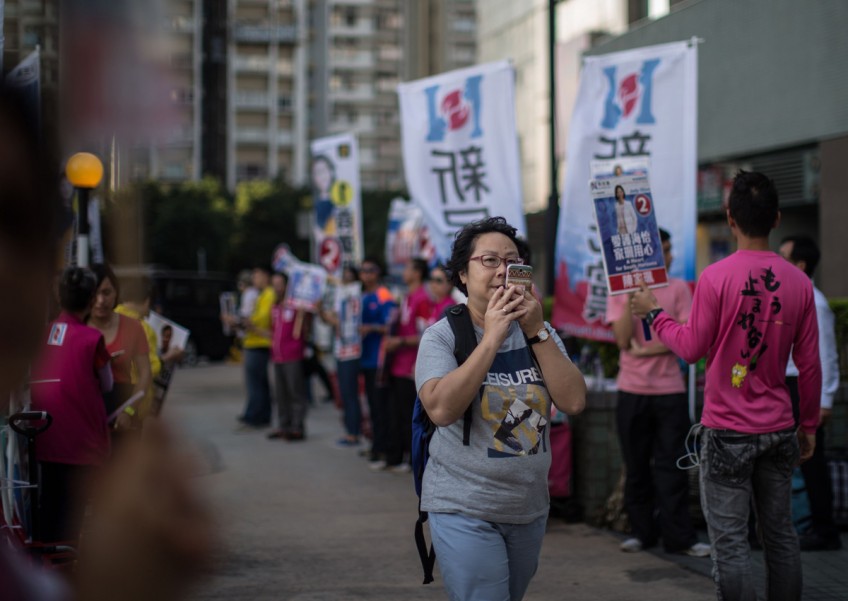 A pedestrian (C) walks past a line of campaigners (wearing pink) for election candidate Judy Chan (not seen) of the New People's Party near a polling station in the Southern district of Hong Kong on Nov 22, 2015.
AFP

HONG KONG - Hong Kong went to the polls Sunday for the first time since huge pro-democracy protests gripped the city, in a key test of public sentiment.

The spotlight is on the district elections to gauge whether support for the democracy movement can translate into votes and bring change to the political landscape.

Hong Kong is semi-autonomous after being handed back by Britain to China in 1997, but there are fears that Beijing's influence is growing.

Tens of thousands of protesters took to the streets for more than two months at the end of last year demanding fully free elections for the city's next leader, in what became known as the "Umbrella Movement".

The rallies were sparked after Beijing insisted candidates for the first public vote for Hong Kong's leader in 2017 would first have to be vetted by a loyalist committee.

Some voters said the democracy movement had motivated them to cast their ballot.

"It's the little power we have," said 28-year-old administrator Kris Fong, voting in the northern district of Yuen Long.

Fong said she had chosen a pro-democracy candidate because she felt the city was being "manipulated" by Beijing. She had missed previous elections but said voting this year was more important.

"After last year's umbrella revolution I feel that, however insignificant our vote might be, it's our only legitimate way to tell the people... up north what we are thinking," said Fong, referring to powers in Beijing.

Student leader Joshua Wong, 19, the teenage face of the democracy movement, was eligible to vote for the first time.

"I finally cast the first vote of my life," he said in a Tweet.

"Feeling exhilarated." Just over 3.1 million residents are registered, with a 30 percent turnout by early evening.

The figure was slightly higher than at the same stage four years ago. Turnout at the end of the 2011 vote totalled 41 percent.

Despite galvanising widespread support at the beginning of the mass street protests, democracy activists were unable to win concessions on political reform from the authorities in China or Hong Kong.

The movement has since stalled and splintered - Sunday's vote sees the new generation of democrats stand against the old guard in some seats.

The younger candidates, many of whom cut their teeth during last year's mass rallies, have been dubbed "Umbrella Soldiers" by local media.

The umbrella became the symbol of the movement as protesters used them to shield against the elements, and to protect against pepper spray and tear gas fired by police.

"The younger democrats are testing their strength," Sonny Lo, professor of social sciences at the Hong Kong Institute of Education, told AFP.

"All eyes are on whether the umbrella activists can win at least a few seats... their performance will point to a real generational change," Lo said.

There are 431 representatives for the 18 district councils - currently pro-establishment parties hold a majority in every council.

Pro-government candidates are casting themselves as a force for stability.

"I don't think it's realistic to say we must have democracy and nothing else," said Sung Fung-kiu, 66, who said she voted for a pro-Beijing candidate in the Tsuen Wan district.

"Occupying the street was just too much. What we need is stability and peace," she told AFP.

Analysts say it is unlikely the democrats will significantly increase their seats, outgunned by the well-funded and better organised pro-government camp.

But young activists say making a stand is an important first step, even if they lose.

For some voters, however, local daily-life issues outweigh politics.

"I have no political affiliation as long as the person serves the public well in the district," said Matthew Mok, 76, a retired teacher voting in Tuen Mun district.