Pro-democracy activist Joshua Wong Chi-fung has been banned by the Hong Kong court from travelling to London to receive a human rights award from the British parliament, as he faces a charge of inciting anti-government protesters to besiege the police headquarters.

Toh said Wong did not need to be present in British parliamentary hearings and meetings in which he was invited, and could instead remain in Hong Kong to help the city return to peace.

Wong, secretary general of localist party Demosisto, was named the recipient of the Westminster Award for Human Life, Human Rights, and Human Dignity by both houses of parliament in Britain, for his "commitments to universal suffrage, human rights and free speech".

He was the second Chinese person to receive the prize after blind mainland activist Chen Guangcheng was awarded in 2013.

Wong initially planned to leave Hong Kong next week for 20 days, during which he would attend parliamental hearings and deliver speeches in six European countries, and receive the prize in the Palace of Westminster on December 12.

But Hong Kong's Eastern Court imposed a travel ban on Wong on August 30 after he was charged with organising, taking part in, and inciting others to take part in an unlawful assembly outside the Wan Chai police headquarters on June 21.

The lower court also refused to lift the ban earlier this month, saying Wong's proposed trip was "not very important". 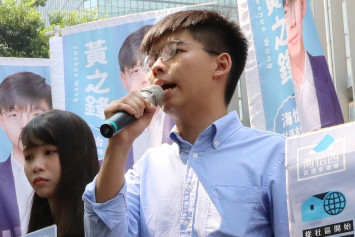 Wong said he was disappointed with the ruling which amounted to "an extra punishment" before he was convicted by the court.

A statement by Demosisto said the court was now under immense pressure following Beijing's criticism over its ruling on Monday that the anti-mask law was unconstitutional.

"Even in times of social turmoil, it's really inappropriate and unnecessary for the court to step in and comment on how politicians should behave," Wong said on Facebook.

He was charged alongside party member Agnes Chow Ting and chairman Ivan Lam Long-yin. The trio will appear in court again on December 19.