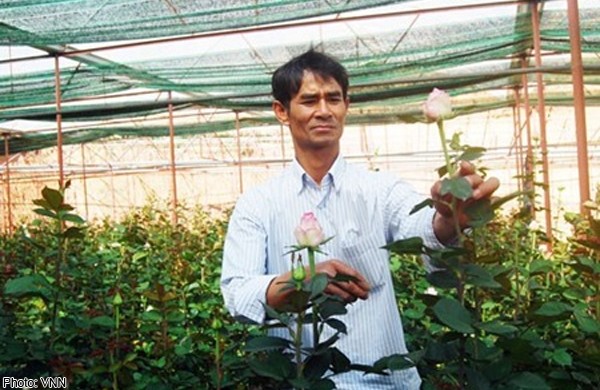 LAM DONG - Horticulturalists Vo Van Thanh and his wife Ngo Thi Ngoc Hieu are considered the millionaires of rose growing by their neighbours in the Central Highlands Province of Lam Dong.

The two have evolved a highly effective system of raising the flowers in green houses that provides revenue of about VND7 billion (about S$480,000) a year.

Farmer Vo Van Thanh, 42, and his wife Ngo Thi Ngoc Hieu, 40, who live in Lac Duong Township, earn an average of VND600 million monthly from their rose garden at the foot of Lang Biang mountain. It is considered the best farm in the district.

Thanh was born into a poor farming family of six children. He gave up school in the seventh grade and travelled around the country doing various jobs.

He married in 1998 and the couple decided to return to Lam Dong Province to rent a plot of barren land and cultivate vegetables.

However, the earnings from market gardening were not enough to feed and clothe the family, so the couple switched to growing roses in green houses.

Firstly, they experimentally planted roses on one hectare of rented land. Then, after learning that earnings were not stable, they expanded their farm.

After eight years, the couple now own four hectares of green houses and continue to hire more land.

Thanh searched through advanced technology on internet and applied it to growing roses. In 2010, he flew to Europe to examine rose-growing in Holland and France.

"The 15-day journey helped me widen my eyes," Thanh said. "I figured out that rose growers in European countries planted different varieties of flowers on various kind of land as well as applying advanced farming technology."

When he returned, Thanh applied the techniques he had observed to develop his farm.

"The drop-by-drop water system not only saves water and labour, but also increases productivity," he said.

"I selected European technology suitable for the soil on my farm. It includes ways of choosing seedlings, growing, harvesting - and preservation for the market."

Now, he employs 25 labourers on salaries of VND4 million-VND8million.

Trieu said Thanh was not only one of the first to apply advanced technology in production, but he also helped local people use it.