How the 'smart age' could revolutionize old age 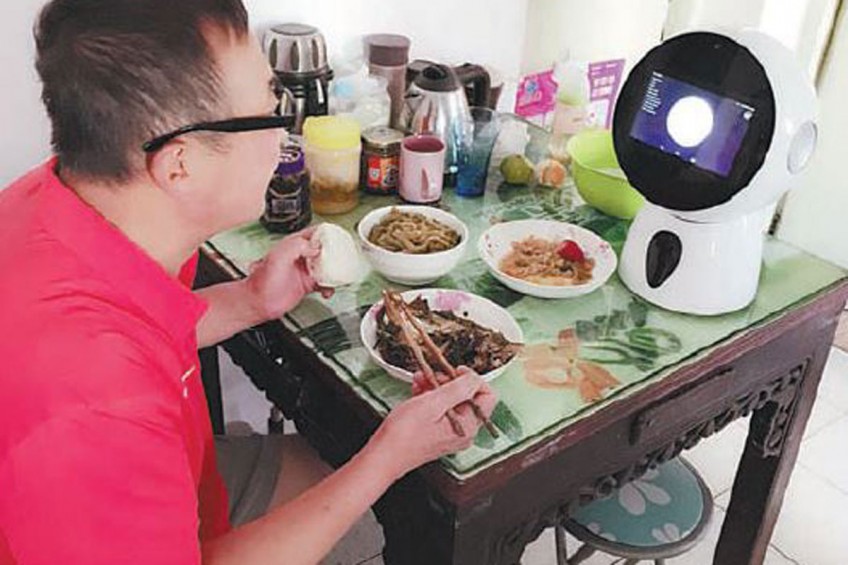 Chi Yunchang, a 60-year-old Shanghai resident, eats a meal while talking to Roby Mini, a robot tailor-made for the elderly market.
China Daily

The future of senior care in China may soon be represented by a 40-centimeter-high human-shaped robot with a large round screen.

Roby Mini, which can record activity, order groceries and provide entertainment, has been specifically designed for use by elderly people, especially those who live alone.

Shanghai PT Info Co, Roby Mini's manufacturer, said mass production started on Oct 15, ahead of the "Double Ninth Festival" - a traditional celebration of the elderly held on the ninth day of the ninth month of the lunar calendar, which falls on Oct 21 this year - and it plans to manufacture 200,000 units by the end of the year.

Roby Mini isn't the only product aimed squarely at the seniors' market, though. There are also smart watches that can track the wearer's location and can contact family members if they require assistance, and mattresses that can monitor heart rate and blood pressure and alert medical professionals in the event of abnormal fluctuations.

Experts believe a new smart age has arrived, one that could help cities such as Shanghai - China's first city to have an advanced aging population - address the issue of caring for the elderly at a time when families are becoming smaller and familial care for seniors is under serious pressure.

Official statistics show that last year the number of registered Shanghai residents age 60 and older hit 4 million, accounting for nearly 30 per cent of the city's population. Nationally, the proportion was 15.5 per cent.

"The contradiction between the rapid growth of the elderly population and the shrinking ability to care for seniors because of a smaller family structure will become more severe because the rate will accelerate. Experts predict that the city's elderly population will rise to 5 million (roughly twice the population of Paris) by 2018," said Zhen Jin, deputy director of the Shanghai Municipal Commission of Health and Family Planning.

Yin Zhigang, director of the Shanghai Research Center on Aging, said smart products for seniors will become indispensible. "Because the family is still the primary care provider for elderly people, the trend of 'intelligentized' products making up for the deficiencies of family care will become irresistible and play a crucial role in caring for the elderly. Technology will gradually become a backbone in this respect," he said.

Shanghai PT Info spent three years developing Roby Mini's voice-interaction system to make it especially user-friendly for seniors, many of whom have poor eyesight, which makes it hard for them to operate controls or read onscreen instructions.

At present, the robot, which costs 4,000 yuan (S$874), understands at least 95 per cent of its owner's words from as far as 2 meters away. Shanghai PT Info is now trying to extend the distance to 5 meters.

"As the majority of seniors don't speak standard Mandarin, we are improving the robot's ability to recognise dialects to improve its in speech-recognition capabilities," Hong Gang, the company's technical director, said.

A number of 360-degree wheels hidden under its body allow Roby Mini to follow its owner via face-recognition software, and it can also start conversations, tell jokes, broadcast music and provide information, such as weather forecasts and the air quality index. Seniors just need to tell the robot what to do, and it will follow their instructions.

Roby Mini can also support long-distance audio and video calls from family members who wish to check on elderly relatives. Hong said the company is planning to develop an automatic-charging function, so the elderly owners will not have to remember to charge their robots.

Zhang Min, director of Kangcheng Nursing Homes in Shanghai's Minhang district, said products such as Roby Mini, based on deep consideration of seniors' daily requirements, will be helpful as companions and will also remind the owners of appointments or chores they need to undertake.

More than 100,000 government-funded alarm systems have been installed in the homes of elderly resident who live alone, and the programme will be expanded to more families to provide security for seniors, especially those of extremely advanced age, those who live alone or can no longer take care of themselves.

The plan also made provisions to equip communities with high-tech equipment to provide care and services for the elderly.

Lujiazui sub-district in the Pudong New Area of Shanghai is a pilot for one such development.

The silver-haired residents of Lujiazui don't need to visit a hospital to undergo electrocardiogram monitoring. Instead, they can go to the nearby community activity centre where the test can be conducted while physicians at a nearby hospital check the results remotely.

There is also an intelligent health system, similar to Nintendo's Wii games platform and tailor-made for the elderly, that allows seniors to take physical exercise in front of the TV screen, playing simulated games of badminton, jogging and stretching.

Shi Yi, the community's director, said the system is very popular with the residents. "Usually, seniors read newspapers or play mahjong without speaking a word in activity centres like these. But now the games engage everybody, and they have great fun competing with each other," he said.

In Shanghai, only 3 per cent of the elderly population lives in nursing homes, while the vast majority depends on families and communities for help. "We're trying to build a smart community to give the elderly modern solutions to management and services," Shi said.

A digital system is being planned that will include functions such as online calls and location positioning, and information related to senior residents, their relatives, neighbours and social workers will be stored to form a complete information network.

"A senior resident will receive help as soon as he or she makes a request on the terminal and we can find someone who can respond within the network," Shi said.

The community authorities also plan to install magnetic monitoring devices on doors and refrigerators in elderly residents' homes to record how many times the door is opened during a single day and to ensure the senior is eating regularly. "The devices will collect information and send the data to residents' children to see if any unusual activity has occurred," Shi said.

Statistics from the Shanghai Civil Affairs Bureau show that more than 80 per cent of residents who have turned 60 since 2013 are parents of the "single-child generation", and the numbers of senior residents who live alone and couples who lack regular family contact continue to rise. The phenomenon has hastened the emergence of diversified products to help monitor and entertain elderly people.

Smart wearable devices that embrace the new generation of technologies, such as mobile Internet, satellite navigation and positioning, are becoming more commonplace. For example, a watch developed by the Jiangsu Beidou Satellite Application Industry Institute can track the wearer's position and alert the family automatically if he or she gets into difficulty.

"If the wearer gets lost or is caught in an emergency situation, he or she can press the SOS button for three seconds and the watch will contact their relatives automatically. Children of users can download an application to their smartphones and check their parents' location at any time," said Chen Fuzhou, director of the institute.

Some nursing homes have also started to employ advanced technology. Cypress Garden in Hangzhou, Zhejiang province, the first senior care provider in China to be fully financed by foreign capital, was established specifically for seniors with dementia.

The ceilings are fitted with dolly tracks that allow staff to transport patients who are unable to move by themselves, and the facility also offers mental simulation in a safe environment.

"We have constructed a 'wandering garden' for them to satisfy their mental needs," said Mark Spitalnik, CEO of Cypress Garden. "In the garden, seniors can walk wherever they want without the risk of encountering danger because it is equipped with a high-tech security system that sends out an alert when an unusual situation occurs."

Many elderly residents, such as Wang Yuming, a 72-year-old Shanghai resident who lives with his family, welcomed dedicated care products for seniors because of the freedom they can bring.

"High-tech gadgets have made modern life easier and faster. We seniors should keep up with the times and make good use of these devices to take better care of ourselves and alleviate the burden on our children. The only concern may be the price," he said.