Algorithms used by social networks create these effects, which political parties use to set agendas, create messages and communicate with targeted voters, explained Sakulsri Srisaracam, a scholar at the Panyapiwat Institute of Management's Faculty of Communication Arts.

In the online echo chamber, posts are highlighted to draw users' attention to what people who share the same or similar opinions are saying. Users thus become further convinced that what they believe is correct, Sakulsri said.

In the filter bubble, only one set of "truths" appears in users' information feeds, which are based on their own personality, interests and opinions, she said. 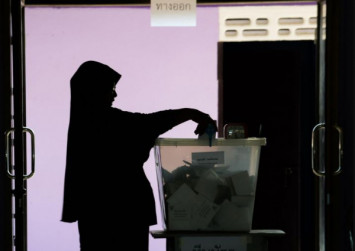 "These effects result in users missing out on all commentary representing an opposing viewpoint, which adds to the political divide on social media," Sakulsri added.

The Future Forward Party, which made its political debuted with a strong stance against the military junta and won the third-most votes and up to 80 seats in the Lower House, according to unofficial results, appears to have used social media effectively to attract young voters.

More surprisingly, the Phalang Pracharat Party, which is seen as appealing more to older, conservative voters, came in second with about 116 seats. Observers have suggested that many younger voters didn't want to "unlike" Prime Minister Prayut Chan-o-cha, the party's nominee to remain in that office. He's affectionately known as Uncle Tu.

Experts also point out that young people actively share their feelings on social media, while older people are more circumspect or keep their opinions to non-public communications channels like Line.

"This election was clearly a battle between the old and new generations," said Chanut "Ajarn Bomb" Kerdpradub, a specialist in social-media communication.

By "dark social" he means people who discuss their shared views only on closed channels to communicate, leaving outsiders in the dark about their opinions.

Apisilp said older and working-age people rarely post their political opinions on social media, so it's not surprising to see endless negative comments about the junta-led government but few comments defending it.

"The pro-junta Phalang Pracharat won big because their supporters don't say much online and remain part of 'the silent voice'," Apisilp said.

Warat Karuchit, a lecturer at the National Institute of Development Administration, cites the "spiral of silence" theory, by which people of the minority opinion remain reticent in public discussion and at the same time never change their views.

This would suggest that young people who dislike Prayut the social media users who are most active, while his supporters form a less distinctive and outspoken minority.

"So the minority prefer not to express their views but cast their ballots in his favour," Warat said.

Although Phalang Pracharat was unable to secure the "share of voice" - akin to the market share a brand commands over its competitors - it was still able to maintain "mind share", meaning public awareness, and also increase its "heart share", meaning an emotional bond with voters, he said.

Sakulsri said Future Forward made the most of the social-media echo chamber in persuading young people to back it, but "the young ended up disappointed with the results - they believe the party should have won more".

She cautioned against trying to predict election outcomes based on discussion online, since so many silent voters are also online.

Though the academics agree that politicians have improved at tapping social media to communicate with voters, Sakulsri criticised journalists for failing to balance out the one-sided chatter in the echo chamber.

The mainstream media either offered straightforward reports or followed the agendas set by the politicians, without giving the electorate and sense of guidance, she said.

"We need to make people, especially the younger generation, more politically and digitally literate because, from now on, political and election issues will be shared online, via social media and other digital platforms, instead of reaching voters at the door."