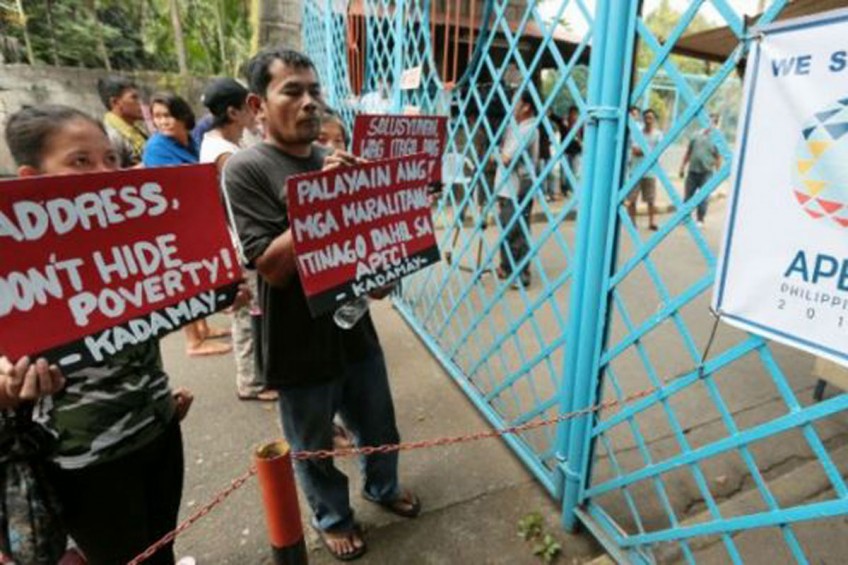 Militant activists protest outside the gate of Manila Boystown Complex in Marikina City on Monday, November 16, 2015, to call on the authorities to "free" urban poor street dwellers from Manila which were housed in one of the building of the complex according to the activists.
Philippine Daily Inquirer

HUNDREDS of homeless people, including more than 140 street urchins, have been rounded up in "clearing operations" to spruce up Metro Manila ahead of the Asia-Pacific Economic Cooperation (Apec) summit this week, Human Rights Watch (HRW) said Monday.

In a stinging rebuke of official denials about the conduct of such operations, the international human rights organisation called for a stop to the "mass arrest" of people living off the streets in the capital, and demanded the release of those who had been detained.

"Philippine authorities have violated the rights of hundreds of Manila residents to put a cynical veneer of 'cleanliness' on the city for Apec delegates," said Phelim Kine, HRW Asia's deputy director.

"The removal and detention of homeless and impoverished residents from where they live and work without due process is a violation of their basic human rights," Kine said in a press statement.

Social Welfare Secretary Corazon Soliman, however, insisted that these were "reach-out operations," and were not in any way connected to the Apec activities.

She said the street dwellers were only being "rescued" from the streets so they could receive government assistance.

"We continue to emphasise that families being rescued from the streets are brought in for orientation and possible inclusion in the Modified Conditional Cash Transfer (MCCT) Program," Soliman said.

Under the 2-year-old MCCT programme, an indigent family may receive up to P4,000 in monthly rental support payments for up to six months, she said. Target beneficiaries are 4,408 low-income families in Metro Manila.

Little is publicly known of the programme, but Soliman said the reach-out operations were in fact a year-round, 24/7 effort of the Department of Social Welfare and Development (DSWD) in coordination with local government units and with street facilitators on the frontline.

"We have been doing these initiatives since 2013, when MCCT was launched. Hence, it is not true that these are being done just because the country is hosting the Apec. Moreover, we do not cover only Manila, but also other areas of Metro Manila," she added.

The group said local authorities had begun rounding up adults and children from the streets and informal settlements around Manila since Nov. 9 in preparation for the Apec meeting, which would gather the heads of state or representatives of 21 member-economies.

"On the orders of local mayors, including Manila Mayor Joseph Estrada, police and social workers are detaining them under guard in government facilities for the homeless and orphans," the group said.

Citing DSWD figures, HRW said a total of 48 homeless or indigent individuals had been placed under detention at Jose Fabella Center, a government-run facility for the homeless, from Nov. 9 to 12.

Forty of them were from Manila, while the others were from nearby Quezon City and Pasay City, the group said.

The Manila government also reported that authorities had "rescued" at least 141 street children as of Nov. 10, dozens of whom were sent to Boys Town, HRW said.

Based on witness accounts, police, neighborhood officials, and social workers appear on the streets where people live and examine their tents and hovels. They are then detained and brought by truck to the Reception and Action Center (RAC), a social welfare facility run by the Manila government.

Many of the adults operating food carts or sell scavenged items were told by officials who detained them that they would be able to return to the streets and resume their work after the summit, the group said.

A scavenger, identified only as Dario, who was arrested on a street near Roxas Boulevard, said the authorities who detained him on Nov. 11 were "brutal."

"They were merciless," HRW quoted Dario as saying. "They took our things or did not allow some of us to bring our belongings," he said at Jose Fabella Center.

Cora, 52, a street vendor in the Ermita district who was detained on Nov. 11, told HRW she pleaded with the municipal authorities to release her, but to no avail.

"No matter how I pleaded, they didn't listen," Cora was quoted as saying. "They would only let me go after Apec. That's what they told me."

HRW noted that it was not the first time the Philippine government attempted to "hide" Metro Manila's poor for a major international event.

It recalled that in January, prior to the visit of Pope Francis, the DSWD had bussed dozens of people off the streets of Manila to a resort in Batangas province.

In May 2012, during a gathering of officials from the Asian Development Bank, the government walled off sections of the highway from the airport to conceal slum communities from view, HRW said.

HRW reminded the government that the Philippines was a party to several human rights treaties, including the International Covenant on Civil and Political Rights, which prohibited arbitrary arrest and detention.

The country is also a signatory to the Convention on the Rights of the Child, which provides that the detention of children shall only be "a measure of last resort and for the shortest appropriate period of time," it noted.

The UN Code of Conduct for Law Enforcement Officials, another convention the Philippines has upheld, mandates all law enforcement officials to respect and protect human dignity and uphold the human rights of all persons, HRW said.

"Apec delegates should make it clear to their Philippine hosts that abusive 'clearing operations' against Manila's most vulnerable residents only tarnish the reputations of the Philippines and Apec," he said.