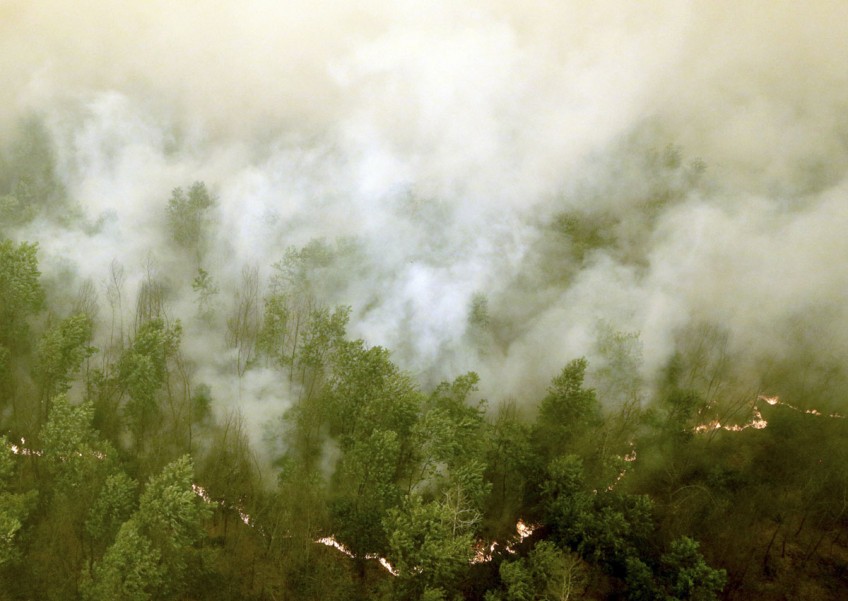 A humanitarian crisis looms in Indonesia as the prolonged dry spell, coupled with waterbombing aircraft getting nowhere near fires seething deep below peatlands, all but ended any hope of a real respite from the haze in the weeks ahead.

Schools in parts of Sumatra and Kalimantan, two of the worst-hit areas this year, were ordered to suspend classes from today. But if conditions worsen, and as a last resort, there are plans to evacuate babies and children from affected areas to ships belonging to the military or state-owned shipping firm PT Pelayaran Nasional Indonesia.

Coordinating Minister for Political, Legal and Security Affairs Luhut Pandjaitan gave the bleak assessment at a briefing on the haze crisis yesterday, after a high-level meeting involving ministers and key government officials.

"This is a humanitarian effort, we are thinking about our children, we may move them to places with safer ISPU levels," he said, referring to Indonesia's air pollution standard index. "We cannot wait."

Mr Luhut added that a massive endeavour is needed to deal with the fires, and Indonesia has a critical five-week period ahead before the rains return. This, after the latest forecast by the country's Meteorology, Climatology and Geophysics Agency showed there would be no rain until the end of next month.

Thick smoke from the raging fires has spread across many parts of South-east Asia. Southern Thailand is recording its worst haze levels in a decade, prompting the Thai authorities to urge Indonesia to do more to mitigate the crisis. Similarly, Malaysia's northern states such as Penang saw air quality hitting "very unhealthy" levels yesterday.

The forest and peatland fires, resulting from slash-and-burn methods to clear land for cultivation, have prevailed despite hundreds of sorties undertaken by waterbombers as part of a multilateral operation to put out the fires.

"Fires on peatland are very difficult to douse, plus our peatland can be as deep as 5m, 10m... It is almost impossible to douse the fire by air," said Mr Luhut, who has been leading his country's efforts to resolve the crisis. He called for more international assistance yesterday, specifically from Canada, which has experience in fighting peatland fires.

This after he found out that some schools had stayed open because of the annual examinations.