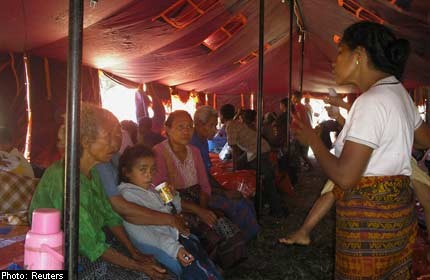 Villagers of Palue island, who were affected by the eruption of Mount Rokatenda, sit in a tent in Maumere.

MAUROLE, INDONESIA - More than 500 people have been evacuated from an Indonesian island where a volcanic eruption killed five at the weekend, an official said, as Mount Rokatenda spewed more clouds of ash Monday.

The volcano on Palue island in East Nusa Tenggara province threw red-hot ash two kilometres (1.2 miles) into the sky Saturday and unleashed molten lava onto a beach, killing three adults and two children as they slept.

Officials had previously put the death toll at six, but on Monday revised it down.

Rescuers have been battling through roads blocked by ash to reach affected areas and try to persuade reluctant villagers to leave their homes.

"Since the eruption on Saturday, 511 people living near the Rokatenda volcano have been evacuated from Palue island to Maumere," said national disaster agency spokesman Sutopo Purwo Nugroho, referring to a city on nearby Flores island.

Six motor boats were being used to evacuate people and the disaster agency had sent aid to help those displaced, including 20,000 masks so people could protect themselves from volcanic ash and 1,000 blankets, he added.

Yosep Ansarera, head of Sikka district, of which Palue is part, said that those evacuated came from two villages.

However, he added, "dozens of people remain in their villages, refusing to be evacuated as they don't want to leave their livestock and homes".

Those who have so far left the island are some of the 3,000 people in need of evacuation following the eruption, said Nugroho.

They were inside a three-kilometre exclusion zone around the crater. Authorities had urged people to leave the area and banned all activities inside but many had refused to abandon their homes.

Officials still hope to evacuate the remaining 2,500 people in the zone.

But Bakri Kari, a member of the rescue team, said rescue efforts were proving difficult as "a lot of infrastructure has been damaged".

An AFP reporter on Flores Monday said that he could see the volcano emitting clouds of ash but they were much smaller than at the weekend.

Surono, head of the state volcanology centre, said ash clouds on such a small scale were unlikely to be life-threatening but warned the volcano was volatile and could erupt violently again.

"Rokatenda remains a threat for those living inside the three-kilometre zone," he said.

Rokatenda had been showing signs of increased activity since October.

Some 2,000 people had already been evacuated to Flores before the weekend eruption, leaving around 8,000 people still on the island.

Indonesia has dozens of active volcanoes and straddles major tectonic fault lines known as the "Ring of Fire" between the Pacific and Indian oceans.

The country's most active volcano, Mount Merapi in central Java, killed more than 350 people in a series of violent eruptions in 2010.