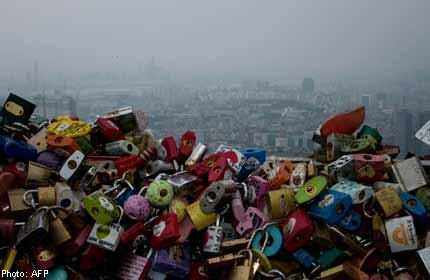 Padlocks inscribed with messages hang off a fence before the Seoul city skyline during heavy rain on July 2, 2013. July marks the wet season for Seoul during which the city of 10 million people receives some 60 percent of its annual rainfall.

A 57-year-old man was found dead after being swept away in a flooded stream in the northern border city of Pocheon, it said.

In Hongcheon, east of Seoul, a 85-year-old man was killed in a landslide, while a 34-year-old man went missing on a flooded road in Gapyeong, the office said.

Weathermen said up to 321 mm (13 inches) of rain battered Seoul and northern border areas for three days until Monday.

Torrential rains knocked down two sections of the barbed wire fence along the border with North Korea, one of them 192 metres long, the South's defence ministry said.

The North's Korean Central News Agency reported Saturday that two people were killed and hundreds left homeless. Updated figures have not been given.

Poor weather makes it harder for the communist state to feed its 24-million-strong population as it lacks advanced agricultural technology and infrastructure.