Hunt on for man who kidnapped and sexually abused dog 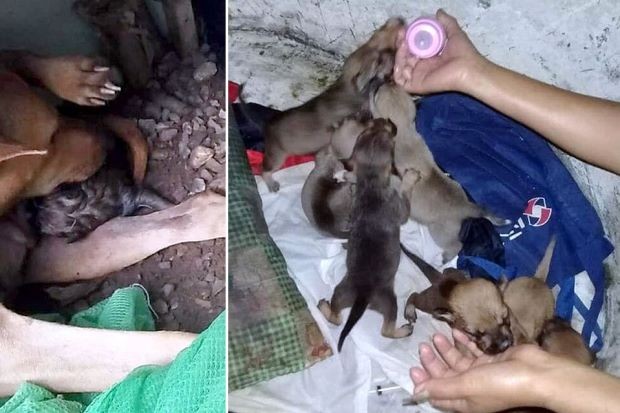 BANGKOK - Rayong police have launched a manhunt for an alleged animal abuser suspected of having stolen a female dog in order to sexually abuse it, leaving its eight 10-day-old puppies to starve.

Watchdog Thailand announced on its Facebook page on Monday morning that it had sought help from Ban Pe police station in Rayong after the dog’s owner had requested assistance from the animal-rights group.

According to Watchdog Thailand, the suspect liked to visit the owner and would bring along food for the dog.

The dog’s owner later found that the man had sneaked in to sexually abuse the animal but, since the family regarded him like a senior relative, it did not initially file a police complaint against him.

But on a later occasion, the man kidnapped the dog in the morning and returned it in the evening, when the dog was found to have a swollen sex organ.

The man did not visit the house again during the period of the dog’s pregnancy, but returned after it had delivered eight puppies, bringing dog food with him.

Watchdog Thailand said the dog then disappeared on August 16, apparently stolen, and the family had since had to feed the puppies with bottled milk.

The family checked the man’s house, but were unable to find him or contact him by mobile phone.

As a result, they decided to seek help from Watchdog Thailand, which in turn coordinated with the police to launch a hunt for him.

Ban Pe police chief Pol Colonel Narongdej Thappajaya said he had assigned his officers to urgently hunt for the man, out of concern for the dog that he had apparently stolen.

Narongdej said the man would face charges of theft and animal cruelty.