'I can smell it through my mask': Taiwanese retail giant accused of selling extremely spoiled pork

Taiwan's RT-Mart apologised after a news report revealed a store in eastern China was selling expired pork at reduced prices.

The pork, which was used in a variety of products like sausages and pork chops, was visibly rotten and smelled terrible, according to Beijing News, which embedded a reporter into the company’s meatpacking department in June.

The report also claimed that selling poor quality pork was a common practice .

The store was based in Jinan in Shandong province in eastern China, and RT-Mart apologised on Monday after the news broke.

“We sincerely apologise for the low-quality meat sold at our Jinan store following the news report,” the company wrote.

“RT-Mart has strict regulations and requirements for food safety and operating procedures. We will examine our practices and make corrections in all of our stores nationwide.”

The company said the spoiled pork had been removed from shelves, the facility has made immediate changes and the relevant staff were suspended.

According to the report, workers there usually sold the leftover pork – referring to meat that was first put up for sale the previous day but had not been sold – for about one third or half of the original price.

If the meat smelled bad, but not so much that it dominated the senses, the workers would wash it before putting it back on the shelf.

For pork that smelled too strong to hide, the workers would mince it, add plenty of flavouring before processing it, and then turn it into sausages, the report said.

“I can smell its odour even while wearing a face mask. I will make meat stuffing from it later,” a worker said in the secretly-taken video.

Another worker who was mincing the pork said in the video, “The meat stuffing here smells sour.”

One worker said they took part in the scheme to increase their earnings.

“If all of the leftover pork was declared unsellable, how can we make money? Where would our bonus come from?” he said.

Officials from the Jinan municipal market authority said they spoke with the management from RT-Mart last Friday after they received complaints of poor meat quality from five outlets across the city. 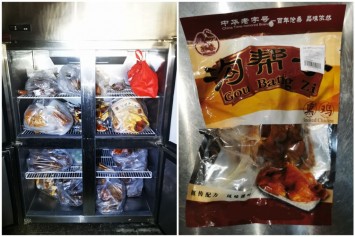 They have not concluded their investigation as of Tuesday.

“They should tell the consumers that the pork is cheap because it is the leftovers from the day before and might have flaws.”

“But if the pork smells, is going mouldy or has other problems that violate the food standard, they should immediately stop selling it,” he said.

In March, a popular congee chain Man Ling was accused of not following the hygiene code in Fujian and selling its porridge dishes by reusing leftover food.

The company apologised and shut down that restaurant, but critics said the punishment was too light.

Hypermarkets are one-stop-shop centres that blend department stores with food supermarkets, much like a large Walmart in the US.