I wanna hold your hand: Trudeau whisked away from adoring Manila mob 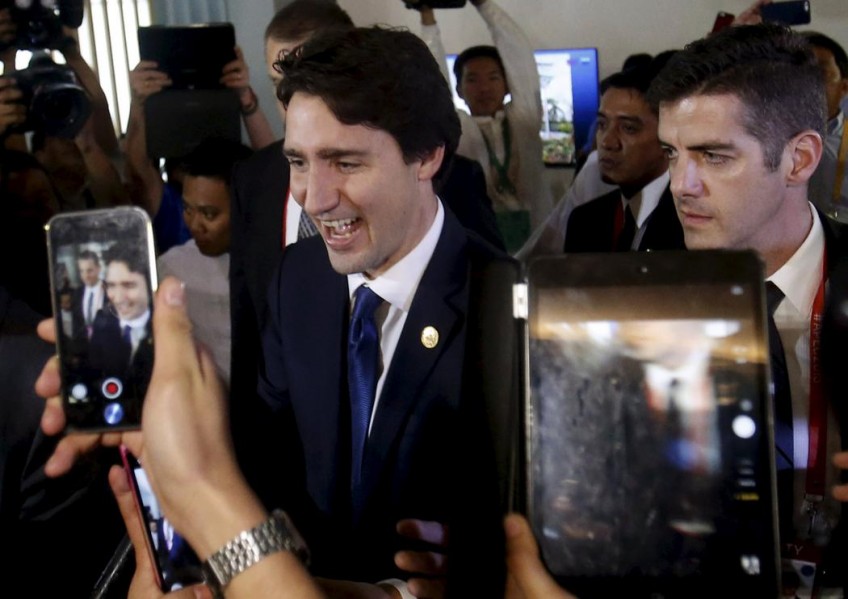 MANILA - Canadian Prime Minister Justin Trudeau had to be whisked away from an Asia-Pacific summit by police bodyguards on Thursday as hundreds of excited journalists and staff swarmed around him in a bid to take photos and say hello.

As he left a news conference at the summit in Manila, dozens of mainly young local reporters and conference staff gathered around him in a hallway.

Trudeau initially smiled and waved and shook a few hands but the crowd suddenly grew larger and he was soon surrounded by a couple of hundred people taking pictures and shouting his name. "He held my hand!" shrieked one woman. Another woman broke away, looking close to collapse.

The prime minister started to look nervous and his bodyguards formed a tight group and rushed him out of the conference centre, shutting the doors behind them. "Things got out of hand. But we expected it because he is one of the best-looking delegates," said security officer Rico Mojica, who asked a friend to take a video of Trudeau while he tried to pacify the crowd.

A Twitter poll with the hashtag #APEChottie, asking netizens to vote for the most attractive leader at the summit, has been one of the most trending in the country this week. Local media declared Trudeau the winner, although Mexican President Enrique Pena Nieto was a close second.

Trudeau escaped from his news conference unscathed and waved to a few more people before climbing into his official limousine and driving off. "He's so cute - and very intelligent," gushed local reporter Katherine Imson when asked why she had joined the crowd.

Trudeau, 43, is the son of former Liberal prime minister Pierre Trudeau and has been in the public eye all his life.

At the news conference a few minutes earlier, asked about the public adulation he generated, Trudeau said he had long learned how to ignore people's perceptions of him. "There were a lot of people who liked my father and liked me for reasons that were entirely unrelated to who I actually was and I had to learn to set aside positive impressions that were not grounded in reality," he said.

[[nid:238194]]
SUBSCRIBE TO OUR NEWSLETTER
Your daily good stuff - AsiaOne stories delivered straight to your inbox